How Social Security Benefits Are Taxed

Social Security beneficiaries must pay federal income tax on a portion of their benefits if their income exceeds certain thresholds; the portion of benefits that is taxable rises with income. Income for this purpose equals a taxpayer’s adjusted gross income (AGI) plus tax-exempt interest, certain other tax-exempt income, and half of Social Security benefits (whether or not they are taxable); this is referred to as “modified AGI.” A three-part formula applies:

For a detailed explanation of the tax calculation, see Appendix Table 1.

The taxation of benefits will provide almost $1 trillion to the Social Security and Medicare trust funds over the next ten years. Without this income, the programs would face greater funding shortfalls and earlier reserve depletion dates.

Taxation of Benefits Is Progressive 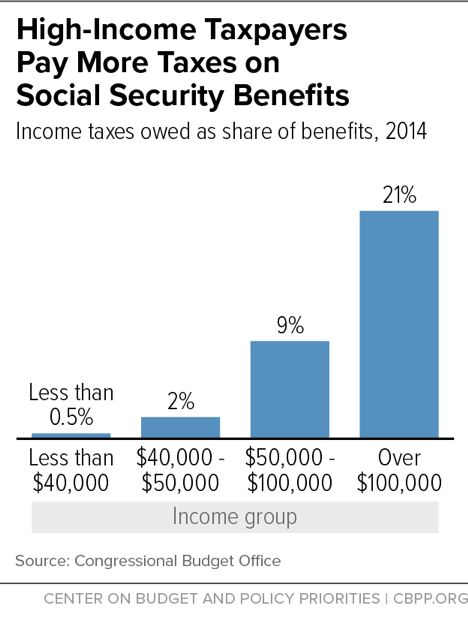 About half of Social Security beneficiaries pay no tax on their benefits because their incomes are below $25,000 ($32,000 for couples), according to the Congressional Budget Office (CBO). At the other end of the income spectrum, a small number of high-income taxpayers pay as much as 31 percent of their benefits in taxes. That’s equal to the top marginal income tax rate of 37 percent applied to 85 percent of their benefits. (The top rate applies to single tax filers with incomes over $510,300 in 2019 and couples with incomes over $612,350.)

Former Social Security Commissioner Robert M. Ball long argued that, since Social Security is an earned benefit, it should be taxed like other earned benefits, such as employer pensions. Workers pay income tax on private pensions to the full extent that their benefits exceed their contributions, with no income thresholds.

As a leading member of the Greenspan commission on Social Security in 1982-83, Ball had an opportunity to promote this idea.[6] The subsequent Social Security Amendments of 1983 provided that up to 50 percent of benefits would be taxable for beneficiaries with incomes above certain levels. A decade later, the Omnibus Budget Reconciliation Act of 1993 provided for the taxation of up to 85 percent of benefits for individuals with modified AGI above somewhat higher thresholds. The provision has since remained unchanged.

Lawmakers chose the 85-percent figure because actuaries estimated that no Social Security beneficiary had paid (through withholding from his or her paychecks) for more than 15 percent of his or her own benefits. The rest represents employer contributions and imputed return on both worker and employer contributions. Most beneficiaries contribute much less than 15 percent of their own benefits, so the 85-percent limit was considered generous.[7] In addition, the income thresholds shield low-income beneficiaries from tax.

The income tax treatment of Social Security benefits is considerably more favorable than that of private defined-benefit pensions, which are otherwise similar to Social Security. Because of the income thresholds and the 50- and 85-percent limits, only about 30 percent of Social Security benefits are currently subject to income taxation. In contrast, defined-benefit pensions are fully taxable except for the typically small portion representing the employee’s own after-tax contributions.

CBO and the Joint Committee on Taxation estimate that taxing Social Security and Railroad Retirement benefits in exactly the same way as private pensions would raise $411 billion in additional revenues over ten years. (Under this approach, the Social Security Administration would compute the taxable amount of benefits and report that information annually to each beneficiary.[8]) Stated another way, the current tax treatment of Social Security provides beneficiaries with a $411 billion tax reduction, relative to the tax treatment that private pensions face.

Proposals to Reduce the Taxation of Benefits

Social Security Subcommittee Chair John Larson has offered a different proposal to scale back the taxation of benefits as part of a comprehensive bill to expand Social Security benefits, raise payroll taxes, and assure long-run solvency.[11] The Larson bill would replace the existing pair of income thresholds with a single set of thresholds ($50,000 for individuals and $100,000 for couples), above which up to 85 percent of benefits would be taxable. As under current law, the thresholds would not be indexed. The amount of income tax revenue allocated to Medicare would not change compared to current law, and the remaining revenue from the taxation of benefits would be allocated to Social Security. While less costly than the Johnson provision, the Larson provision would still reduce Social Security revenues by an amount equal to 0.14 percent of payroll.[12] If the Larson bill did not scale back the taxation of benefits, it would not need to raise payroll taxes as much, thereby leaving more room to raise revenues for other pressing needs, such as strengthening the financing of Medicare and moving to universal health coverage.

[2] 2019 Annual Report of the Board of Trustees of the Federal Old-Age and Survivors Insurance and Federal Disability Insurance Trust Funds, Table IV.A3, https://www.ssa.gov/oact/TR/2019/tr2019.pdf.

[4] Congressional Budget Office, The Taxation of Social Security Benefits, February 12, 2015, https://www.cbo.gov/publication/49948. These figures are for 2014; the numbers would be slightly different today because of the 2017 tax law and other factors.

[7] Wayne Liou and Julie Whittaker, Social Security: Calculation and History of Taxing Benefits, Congressional Research Service, October 27, 2016, p. 12, https://fas.org/sgp/crs/misc/RL32552.pdf. Note that this calculation is distinct from estimates of an individual’s “rate of return” on his or her Social Security contributions.