Repealing Social Security’s WEP and GPO Rules Would Be Misguided

Congress faces mounting pressure from some current and retired public employees to repeal Social Security’s Windfall Elimination Provision (WEP) and Government Pension Offset (GPO), provisions designed to treat workers with work not covered by Social Security comparably to workers whose whole careers are covered. The bill to repeal WEP and GPO, H.R. 82, includes no offsetting tax increases or spending cuts, and so would worsen Social Security financing, moving the trust fund’s reserve depletion date forward by a year and adding nearly $150 billion to the program’s costs over the next ten years.

Far from targeting seniors most in need, repealing WEP and GPO would restore windfall benefits to workers who did not pay into Social Security for much or all of their careers.

Far from targeting seniors most in need, repealing WEP and GPO would restore windfall benefits to workers who did not pay into Social Security for much or all of their careers — and who have other pensions that were designed to replace Social Security (that’s why they were exempted from paying Social Security taxes on that employment). There is a case for updating the rules for workers with earnings not covered by Social Security, using data that are available today but were not at the time of WEP and GPO’s creation. But repealing them altogether would be costly and inequitable. 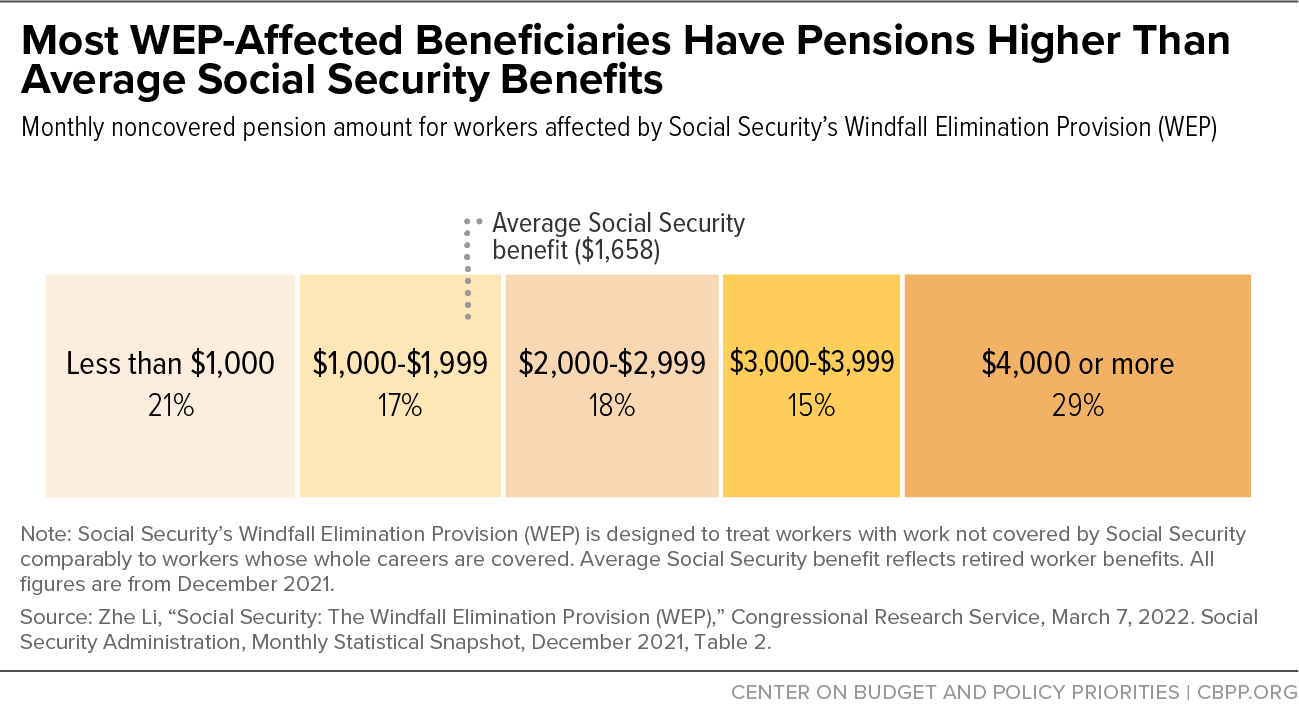 Determining the appropriate Social Security benefits for people who have worked outside the system is difficult, because Social Security’s benefit formula is progressive — that is, benefits replace a greater share of previous earnings for low earners than for high earners.[3] Workers with earnings outside the system can look like low earners, and therefore appear to qualify for benefits based on a higher replacement rate, when in fact they have higher earnings and an additional pension to reflect the non-covered earnings.

Social Security also provides dependent benefits for the lower-earning spouses and survivors of retirees. Workers with significant outside earnings can look like they are a dependent spouse, even when they aren’t because their total earnings (including their non-covered employment) aren’t lower than their spouse’s.

To level the playing field, policymakers enacted the GPO in 1977 and the WEP in 1983. The provisions, which adjust the Social Security benefits of some beneficiaries who also receive non-covered pensions so that they don’t receive benefits based on an erroneous assumption that their incomes during their working years was lower than they actually were. The WEP adjusts a person’s Social Security worker benefit, and the GPO adjusts a person’s spouse or survivor benefit. The WEP and GPO rules are intended to prevent beneficiaries who work outside the system from receiving overly generous Social Security benefits, ensuring a more equitable program. (See Appendix for further explanation.)

Congress intended the WEP and GPO to adjust affected workers’ Social Security benefits so that, roughly speaking, their benefits would reflect the replacement rate they would have received if all of their income had been in covered employment and their eligibility for spousal and survivor’s benefits were determined based on their total income, not just their covered employment. However, because the Social Security Administration (SSA) didn’t have data on beneficiaries’ non-covered wages in 1983, they had to rely on rules of thumb based on beneficiaries’ non-covered pensions to make the adjustments, making the formulas complex and the adjustments inexact. Some beneficiaries get higher benefits than they would if their benefits had been calculated with the correct replacement rate; others get lower benefits.[4]

In addition, the adjustments depend on beneficiaries’ non-covered pensions and years of covered work, which they will not know for certain until the end of their careers. This can make it difficult for affected beneficiaries to understand how the rules will affect them and to plan their retirements. For example, it is impossible for SSA to provide an estimate of workers’ WEP and GPO reductions in Social Security statements.

Similarly, Stephen could appear to have significantly lower lifetime earnings than his spouse, based only on his covered earnings, qualifying him for a Social Security dependent benefit. This could be true even if he earned more than she did, and even though his non-covered pension means he’s not dependent on his spouse. For example, if his spouse’s average annual indexed earnings were $35,000 and she died, Stephen’s Social Security benefit would increase by $480 to a total of $1,527 a month ($18,324 annually) if policymakers repeal the GPO rule. This is because he appears to have earned about half of his wife’s lifetime wages — even though he actually earned more than she did. He would also continue to receive his non-covered pension. Had they both worked entirely in Social Security-covered employment, he wouldn’t be eligible for a survivors benefit because his lifetime earnings were higher.

In addition to providing windfall benefits to workers with non-covered employment, repealing the WEP and GPO would worsen system financing. Social Security already faces a financing shortfall, and this bill would move up Social Security’s trust fund depletion date by one year, from 2035 to 2034 — or possibly sooner.[5] Repealing WEP and GPO would increase Social Security’s costs nearly $150 billion over the first ten years — or 0.12 percent of payroll over the program’s 75-year projection period.[6] The repeal bill before Congress, H.R. 82, does not include any offsetting tax increases or spending cuts.[7]

Policymakers Could Update WEP and GPO Instead of Repealing It

More equitable and less costly alternatives to the repeal bill exist, including proposals by House Ways and Means Committee Chair Richard Neal and Ranking Member Kevin Brady.[8] When Congress enacted WEP and GPO, SSA didn’t have data on non-covered earnings, forcing policymakers to use rough rules of thumb to adjust Social Security benefits of people with non-covered earnings. At that time, SSA began collecting data on non-covered earnings, so now it has complete earnings histories for all new beneficiaries. Because these new data are available, Congress could write new rules for workers with non-covered pensions that are consistent with the original intent of the adjustments for non-covered workers, to ensure that their benefits reflect a replacement rate commensurate with their total income and that the determination about eligibility for spousal or survivor benefits is based on their total income as well.[9]

It is also possible to replace GPO with a formula that determines eligibility for spousal and survivors benefits based on the worker’s total earnings, not just their earnings from covered employment.[10] Replacing the WEP with an updated formula would save Social Security 0.05 percent of payroll over 75 years, and replacing both the WEP and GPO with updated formulas would save 0.08 percent of payroll.[11]

There is widespread support for shifting to a proportional formula for beneficiaries with non-covered work. The Social Security Advisory Board, Bipartisan Policy Center, and a number of Social Security experts have endorsed versions of a proportional approach, as did President Obama.[13] In addition, Congressmen Neal and Brady have each proposed bills that would apply the proportional formula to beneficiaries with non-covered work, as long as it provides a higher benefit than the WEP. These bills only address the WEP, not the GPO, and cost $29 billion and $26 billion over ten years, respectively, primarily because the bills include another provision that would also provide additional benefits to beneficiaries currently affected by the WEP.

For a typical worker, Social Security benefits are calculated based on the highest 35 years of work. First, the agency calculates the worker’s average indexed monthly earnings (AIME), then enters it into the Social Security benefit formula to calculate the worker’s basic benefit amount (known as the primary insurance amount, or PIA). The formula is progressive, meaning it replaces a greater share of earnings for people with lower earnings than for those with higher earnings. In 2022, the PIA formula replaces 90 percent of the first $1,204 in AIME, 32 percent of AIME over $1,024 and up to $6,172, and 15 percent of AIME above that amount.

For beneficiaries with substantial non-covered work, instead of replacing 90 percent of AIME up to the first “bend point” ($1,024 in 2022), the current formula replaces 40 percent.[14] The other two parts of the PIA formula remain the same. However, the amount of the WEP reduction cannot exceed half of the non-covered pension a worker receives, and the WEP does not apply to workers with 30 or more years of covered work. There is also an adjusted formula for workers with 20 to 30 years of covered work, which limits the WEP reduction.

Typically, Social Security beneficiaries can receive spouse benefits if their benefits are less than half that of their living spouse’s benefits, and can receive survivors benefits if their benefits are less than those of their deceased spouse’s. The amount of spouse or survivors benefits is reduced dollar-for-dollar by the amount of beneficiaries’ retirement benefits based on their own earnings. This is called the “dual entitlement rule.” Consider a woman who qualifies for a monthly $1,000 Social Security retirement benefit, and her husband qualifies for a $1,500 benefit. When he dies, she would receive a $500 survivors benefit (her husband’s $1,500 benefit minus her own $1,000 benefit), which would be combined with her own retirement benefit of $1,000 for a total benefit of $1,500, equal to the amount of her husband’s benefit when he was alive.

[10] To do so, SSA would calculate the amount of a non-covered worker’s Social Security retirement benefit based on all of their earnings — covered and uncovered — and subtract that amount from the maximum spouse or survivors benefit the person would qualify for.

What the 2022 Trustees’ Report Shows About Social Security