The economic stimulus package approved by the Senate Finance Committee contains an important improvement to the package the House passed January 29 — the addition of temporary extended unemployment insurance (UI) benefits. The Finance bill would make 13 weeks of additional UI benefits available to all jobless Americans who have exhausted their regular state UI benefits and are continuing to search for work. Jobless individuals in very high unemployment states who exhaust their regular benefits would be eligible for a further 13 weeks (for a total of 26 additional weeks).

These extended UI benefits strengthen the stimulus package, for two reasons. First, these benefits are very highly rated as economic stimulus, because the dollars can get out the door fast and will be spent quickly, providing a needed immediate boost to consumer demand. Second, these benefits would aid a group of people who are experiencing particular hardship because they have lost their jobs in an economy where many workers are not quickly finding new ones. Recent Labor Department data attest to this: the percentage of unemployed workers who have been out of work for at least half a year and are still looking for a job is at an unusually high level for a period on the eve of a recession. So is the long-term unemployment rate. These figures are much higher than they were at the start of the last recession in 2001.

Extended UI Benefits Have Always Been Part of Stimulus Plans

The unemployment insurance program is a joint federal-state program that provides partial, temporary income replacement to workers who have a demonstrated attachment to the labor force and who lose their jobs due to a layoff or other economic reasons (or must otherwise leave their jobs through no fault of their own).

Unemployed individuals who qualify for UI benefits typically are eligible for 26 weeks of regular state benefits. The UI system also includes an “extended benefits” (EB) program that was originally intended to provide additional weeks of benefits during downturns to workers in high-unemployment states who are unable to find a new job before their benefits run out. The trigger for the extended benefits works poorly, however, and in every major recession in recent decades, the federal government has created a separate, temporary program to provide additional weeks of unemployment benefits to workers who have exhausted their regular UI benefits and continue looking for work.[1]

In the past, these federal extended benefits frequently have not been enacted in a timely manner, but they have always been an important component (and sometimes the only component) of any federal fiscal stimulus package. For example, when stimulus first began to be debated following the September 11 terrorist attacks, the unemployment rate for September 2001 was 5.0 percent, but Congress and the Administration took until March 2002 to work out agreement and pass the stimulus package (by which time the unemployment rate had risen to 5.7 percent and was still climbing.)

The Finance bill would provide all unemployed workers who exhaust their regular benefits through December 31, 2008 and continue to look for work with 13 weeks of extended benefits. An additional 13 weeks (for a total of 26 additional weeks) would be provided in states with particularly high unemployment rates.[2] These additional weeks of benefits would be provided to workers who qualify for them by December 31, 2008.

Temporary expansions in unemployment insurance benefits during a recession are particularly effective stimulus because they are both well-targeted and temporary. They go to workers who are involuntarily unemployed and whose incomes have fallen below their normal level of spending, a group that tends to be concentrated in the areas and industries most affected by the slowdown. As Nobel laureate Joseph Stiglitz wrote in late 2001 with reference to proposals to temporarily expand UI benefits at that time, “give money to people who have lost their jobs in this recession, and it would be quickly spent.

Similarly, Peter Orszag — now the CBO director and then an economist at the Brookings Institution — observed in November 2001:

Temporary expansions in unemployment insurance help to break the downward economic spiral created by job layoffs by providing benefits to families of unemployed workers. Because the spending needs of these families typically exceed their income following the loss of a job, the families are likely to spend a high percentage of any additional income they receive during their periods of unemployment….

Unemployment insurance thereby promotes additional spending by households with unemployed workers, boosting demand for products and protecting the jobs of workers in the firms that produce those goods and services. Temporary expansions in unemployment insurance consequently are a “win-win” proposition: They are quite effective at helping more people to keep their jobs during an economic downturn, while also helping those who are unfortunate enough to lose their jobs.

In a recent House Budget Committee hearing, Orszag reiterated the value of additional UI benefits as stimulus, commenting that “research has shown that the unemployment insurance system is among the most effective dollar-for-dollar economic stabilizers that we have in terms of counterbalancing periods of economic weakness." In CBO’s analysis of options for responding to short-term economic weakness, extending or expanding unemployment insurance benefits received the highest scores on cost-effectiveness (“large”), timeliness (“short” lag from enactment to stimulus) and certainty of effect (“small” uncertainty about policy’s effects). [3] No other tax cut or spending option, except for a temporary increase in food stamp benefits, received CBO’s top rating as effective stimulus in even two of these categories, let alone all three.

The speed with which additional UI benefits would reach consumers and benefit the economy is particularly notable. Extended benefits enacted in 2002 in response to the last recession began flowing to long-term jobless workers within a month of enactment. Including a UI extension in the current stimulus plan would enable federal resources to start reaching consumers months earlier than if the plan remained limited to tax rebates. No matter how quickly a stimulus package is enacted, the first rebates cannot reach households until late May, and many tax filers will not receive their rebates until July or even early August.

Opponents of extending UI benefits sometimes argue that the prospect of losing their UI benefits is an important incentive for unemployed individuals to look for work. But the economic research that is sometimes used to support this view is not applicable during a recession. As former Federal Reserve Chairman Alan Greenspan testified at a 2002 Joint Economic Committee hearing,

…[W]hen you get into a period where jobs are falling, then the arguments that people make about creating incentives not to work are no longer valid and hence, I have always argued that in periods like this, the economic restraints on the unemployment insurance system almost surely ought to be eased to recognize the fact that people are unemployed because they couldn’t get a job not because they don’t feel like working.

Mark Zandi, chief economist at Moody's Economy.com has quantified the "bang-for-the-buck" of the various components that are under discussion in the current stimulus package. He estimates that extending UI benefits would generate $1.64 in additional economic activity per dollar of cost. That is the second highest bang-for-the-buck of all stimulus options, just behind a temporary increase in food stamp benefits at $1.73.[4] 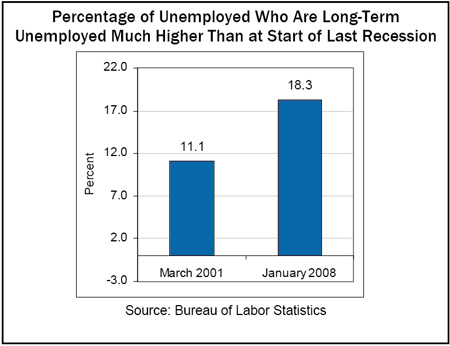 This high rate of long-term unemployment at a time when the economy is weakening is a signal of trouble ahead for people who will be exhausting their UI benefits. One way to measure the extent to which the regular UI program is providing adequate help for unemployed workers in an economy that is weakening is to examine the percentage of all UI beneficiaries who are “exhausting” their benefits each month — that is, the share of UI beneficiaries in a given month who receive their final benefit without having found a new job. At the start of the last recession in March 2001, this percentage stood at 31.7 percent of UI beneficiaries. In December 2007 it already was at 35.6 percent, and this figure is likely to climb higher in the months ahead. (The National Employment Law Project (NELP) has produced state-by-state estimates of the number of workers who will exhaust their regular UI benefits in the coming months; see the table on the next page.)

Extended unemployment insurance benefits have been a part of the federal response in all major recessions of recent decades, but are not included in the package negotiated by House leaders and the White House. Adding such benefits, as proposed by the Senate Finance Committee, would strengthen the effectiveness of the stimulus package while aiding many of the people hit hardest by the weakening of the economy.

[1] Extended unemployment insurance benefits were not enacted in the short 1980 recession.

[2] The benefits in high unemployment states could be triggered in several ways. Currently, only one state, Michigan, would qualify.