Number of Uninsured Fell in 2011, Largely Due to Health Reform and Public Programs

The Census Bureau announced yesterday that, in 2011, the number of uninsured Americans fell for the first time in four years, and the percentage of Americans without health insurance experienced the largest single-year drop since 1999.  The Census data suggest that health reform and other federal policies are responsible for a significant part of the gains in coverage.

The largest increases in coverage came among young adults, largely due to a provision of the health reform law (officially the Affordable Care Act, or ACA) allowing adult children up to age 26 to stay on their parents’ private insurance plans.

Forty percent of the decline in the number of uninsured people occurred among individuals aged 19 to 25; some 539,000 fewer 19- to 25-year-olds were uninsured in 2011 than in 2010.  This allowed the overall percentage of non-elderly people with private coverage to remain steady, rather than to decline, for the first time in 10 years.  (Private coverage increased among those under 25 by 1.6 percentage points, while declining among those aged 25-64, by 0.4 percentage points, with the two effects offsetting each other.) 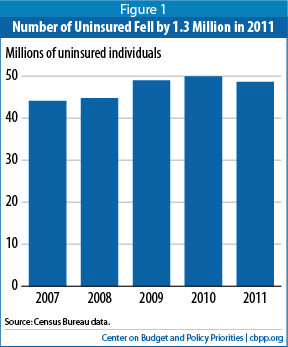 The overall gains in coverage also reflected a significant increase in the number and percentage of Americans with public health insurance — principally through Medicare, Medicaid, and the Children’s Health Insurance Program (CHIP).  More people enrolled in these programs as the population aged and employer-based coverage continued to erode among those aged 25 to 64.

In the case of Medicaid and CHIP, federal policies, including a temporary increase in Medicaid funding for states through June 2011 (which policymakers included in the 2009 Recovery Act and later extended) and health reform’s requirement that states maintain their eligibility levels and enrollment procedures, likely enabled these programs to cover more low-income people during the slow economic recovery.[1]   Medicaid and CHIP enrollment tends to continue rising for a few years after the end of a recession.

Substantially more progress in reducing the ranks of the uninsured should occur starting in 2014.  Due to health reform, 30 million people who would otherwise be uninsured will obtain health coverage by 2022, according to Congressional Budget Office (CBO) estimates, as the law’s principal provisions expanding coverage have an increasing impact.

The new Census figures show that:

Number of Uninsured Fell But Remains Above Pre-Recession Level

The 0.6 percentage-point drop in the percentage of Americans who were uninsured in 2011 represents the largest single-year decline in the uninsured rate since 1999, when many states created or expanded insurance programs for low-income children under CHIP.  The progress in 2011 partially reversed the losses in coverage during the last several years, when the uninsured rate rose from 14.7 percent in 2007 to 16.3 percent in 2010 and the number of uninsured people climbed from 44.1 million to 50.0 million.

Coverage levels remain below those before the Great Recession of 2007 to 2009, however.  Some 4.5 million more Americans were uninsured in 2011 than in 2007, and the uninsured rate was 1.0 percentage point higher.

One key contributor to why more Americans were insured in 2011 was a substantial rise in health coverage among young adults, which mainly reflected a health reform provision enabling adult children to get coverage through their parents’ health insurance plans until their 26th birthday.  This provision marked a significant shift from prior rules, under which young adults typically were no longer eligible for their parents’ health plans once they turned 19 or graduated from college. 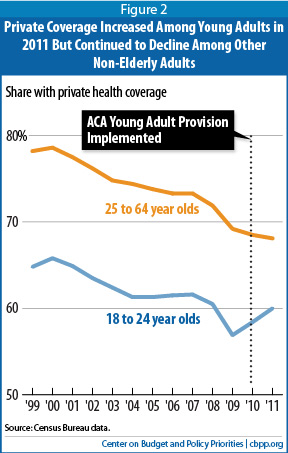 These findings amplify a growing body of research on the positive coverage effects of the young adult provision in the health reform law.  For example, a Commonwealth Fund Survey found that 6.6 million adults aged 19 through 25 stayed on their parents’ insurance plans between November 2010 and November 2011 and could not have done so without the health reform provision.  The survey further revealed that 70 percent of young adults who were uninsured for a period before they were added to their parents’ coverage faced problems getting needed care or paying out-of-pocket medical costs.[4]   The new Census findings also are consistent with preliminary survey data from the Centers for Disease Control and Prevention’s National Health Interview Survey, which found significant increases in private coverage among young adults under age 26.[5]

Similarly, a National Bureau of Economic Research analysis that used data from the Census Bureau’s Survey of Income and Program Participation found that young adults were 30 percent more likely to be on their parents’ employer policies after the health reform provision was implemented, and that the uninsured rate among this group fell substantially after implementation.[6]   In addition, the annual survey of employer-based health insurance issued by the Kaiser Family Foundation and the Health Research and Educational Trust found that 2.9 million young adults were enrolled in employer plans in 2012 who would not have been enrolled in those plans without the young adult provision.[7]

As noted, public program coverage — principally Medicare, Medicaid, and CHIP — grew substantially between 2010 and 2011.  Some of the increase was due to the aging of the population as 2 million more people enrolled in the Medicare program between 2010 and 2011.  The first baby boomers turned 65 in 2011.[8]   This may have contributed to some of the gains in coverage.  Some 12.5 percent of 64-year-olds were uninsured in 2010 but generally became eligible for Medicare upon reaching age 65 in 2011.[9]   Only 1.7 percent of people age 65 and older were without health insurance in 2011.

Children’s coverage remained steady, with 9.4 percent of children lacking insurance.  Since 1999, the percentage of children who are uninsured has fallen by almost one-quarter due to the extension of Medicaid and CHIP to more children, despite sustained erosion in private insurance coverage. [10]

The Census Bureau data show that certain groups of Americans continue to be uninsured at particularly high rates:

Health reform provisions that will enable states to extend Medicaid coverage to nearly all individuals up to 133 percent of the poverty line give states an opportunity to make substantial progress in covering uninsured low-income adults.  The recent Supreme Court decision gives states the choice of whether or not to institute this Medicaid expansion.

Although the federal government will pick up nearly all of the cost of covering beneficiaries whom health reform makes newly eligible for Medicaid (100 percent in the first three years and no less than 90 percent on a permanent basis),[12] some states have indicated they will decline the expansion.  These include some states with the highest uninsured rates in the nation, including Texas,  where 24.2 percent of the non-elderly population was uninsured in 2011; Louisiana, where the uninsured rate was 20.3 percent; and Florida, where the uninsured rate stood at 20.2 percent.

If all states adopt the Medicaid expansion, CBO has estimated, 17 million low-income people would gain Medicaid coverage by 2022, the great majority of whom would otherwise be uninsured.   If many states turn down the expansion, however, progress in covering low-income people who now are uninsured — primarily working-poor adults — will be substantially smaller.

The number of uninsured Americans fell in 2011, primarily due to health reform’s extension of parents’ private coverage to their young adult children and greater enrollment in public health insurance programs (Medicare, Medicaid, and CHIP) as the population aged and amid a continued weak economy.

Implementation of health reform’s major coverage provisions in 2014 should generate much greater progress in reducing the ranks of the uninsured.  Some 30 million people who would otherwise be uninsured will gain coverage by 2022, CBO estimates, with the number being larger if all or nearly all states adopt health reform’s Medicaid expansion.

[1] For information about the “maintenance of effort” (MOE) requirement, see Judith Solomon, “Repealing Health Reform’s Maintenance of Effort Provision Could Cause Millions of Children, Seniors and People with Disabilities to Lose Coverage,” Center on Budget and Policy Priorities, updated February 24, 2011, https://www.cbpp.org/cms/index.cfm?fa=view&id=3397.

[2] Unless otherwise indicated, all figures in this report are taken from the main Census Bureau report issued on September 12, 2012 or the series of tables released along with it.  Carmen DeNavas-Walt et al.,“Income, Poverty and Health Insurance Coverage in the United States in 2011,” U.S. Census Bureau, September 12, 2012, http://www.census.gov/prod/2012pubs/p60-243.pdf.

[5] Matt Broaddus, “The Census Bureau’s Upcoming Report on Health Insurance Coverage in 2011: What to Watch For,” Center on Budget and Policy Priorities, September 10, 2012, https://www.cbpp.org/cms/index.cfm?fa=view&id=3830; and “Health Insurance Coverage: Early Release of Estimates from the National Health Interview Survey, 2011,” Centers for Disease Control and Prevention, June 2012, http://www.cdc.gov/nchs/data/nhis/earlyrelease/insur201206.pdf.

[8] The baby boom generation is generally thought of as people born between 1946 and 1964.

[9] Based on Center on Budget and Policy Priorities’ analysis using the 2011 Current Population Survey data.

[10] The Census Bureau began collecting health insurance coverage data in 1987.  Since then, it has made several changes to the way that it collects data, the questions it asks, and the sample design of the Current Population Survey.  Thus, a comparable series of data are available only back to 1999.  The decline in the uninsured rate among children would be even greater (though the magnitude cannot be known) were we able to compare the 2011 estimates to comparable data for 1997, the year before CHIP implementation began.

Repealing Health Reform’s Maintenance of Effort Provision Could Cause Millions of Children, Parents, Seniors, and People With Disabilities to Lose Coverage

The Census Bureau’s Upcoming Report on Health Insurance Coverage in 2011: What to Watch For