President Trump’s 2021 budget proposes to cut the Supplemental Nutrition Assistance Program (SNAP, formerly food stamps) by more than $180 billion — nearly 30 percent — over the next ten years by radically restructuring how benefits are delivered, taking SNAP away from millions of adults who are not working more than 20 hours a week, and reducing benefits for many other households.[1] The budget also includes two proposals to curtail students’ access to free and reduced-price school meals. The proposed cuts would come on top of nearly $50 billion in cuts over ten years that the Administration is seeking through regulatory action, bringing the Administration’s total plan for cutting SNAP to about $230 billion over ten years compared to current policies. (See box.)

"President Trump’s 2021 budget proposes to cut SNAP by more than $180 billion — nearly 30 percent — over the next ten years by radically restructuring how benefits are delivered."Unemployed workers, elderly individuals, people with disabilities, and low-income working families with children would bear the brunt of the cuts. And the combination of tax cuts and program cuts in the President’s budget as a whole would increase income inequality and widen racial disparities.

The proposed SNAP cuts fly in the face of evidence that SNAP helps families and individuals afford a more adequate diet, supports workers, responds to changes in economic conditions, and has long-term benefits for children who participate, including better health and education outcomes.[2] The budget’s vision for SNAP would severely undermine these goals. Policymakers should instead strengthen SNAP benefits and help SNAP reach more households struggling to afford adequate food.

Over the past year the Administration has pursued through the regulatory process several major SNAP changes that it failed to get through Congress in legislative form. Those regulatory changes “in total are estimated to save nearly $50 billion over 10 years,” the President’s budget states.* Thus, President Trump’s overall plan for SNAP amounts to about a $230 billion cut over ten years compared to current policies: $50 billion through executive actions already underway plus $180 billion through legislation proposed in the 2021 budget.

The Administration’s three regulatory changes would:

Collectively, these executive actions, which Congress opted not to include in the 2018 farm bill that reauthorized SNAP, would end basic food assistance benefits for 3 to 4 million people and shrink benefits for about 6 to 7 million others.

As it did the last two years, President Trump’s budget calls for the Agriculture Department (USDA) to hold back an estimated $20 to $30 billion per year in SNAP benefits — about 40 percent of the benefits issued to households — and use about half of these funds to give households eligible for SNAP benefits of $90 or more a month a box of non-perishable foods such as shelf-stable milk, ready-to-eat cereals, pasta, peanut butter, beans, and canned foods. The box would be in lieu of food that these households would otherwise purchase with that part of their SNAP benefits at the grocery store. Participants apparently would have no choice in what food they received.

The other half of the held-back funds would be eliminated, resulting in about $120 billion in federal SNAP cuts over ten years; households wouldn’t receive these benefits in any form. (The Administration justifies the cut by claiming that the government can purchase, box, and distribute food commodities at a substantially reduced cost.) These changes would take away food choices and pose new food access hurdles for an estimated 32 million people in 15 million households in 2021, or almost 90 percent of SNAP participants.

In addition to the enormous benefit cut, the proposal would radically restructure how SNAP benefits go to the vast majority of recipients. This would upend SNAP’s successful and efficient public-private partnership, in which some 260,000 retail stores around the country participate, in favor of a government-driven approach to procuring food for SNAP households. Such a system would not only shift significant costs to states and nonprofit food distributors but also prove disruptive and costly for current SNAP participants.[3]

Other SNAP Cuts Would Affect Broad Swath of Households

The Administration’s budget proposes another roughly $60 billion in SNAP cuts over ten years. (See Table 1.) They include:

* The sum of the savings for individual proposals exceeds the total projected savings because some households are affected by multiple provisions. This line captures the difference between the two figures, which we believe represents interactions between proposals and the indirect effect of proposed policy changes in other areas of the budget on SNAP.

Source: The estimates of the size of the cuts throughout this paper are based on the Fiscal Year 2021 Budget of the U.S. Government, https://www.whitehouse.gov/omb/budget/ and the “Explanatory Notes” that USDA provides to Congress, https://www.obpa.usda.gov/32fns2021notes.pdf.

The President’s budget includes two proposals that would cut child nutrition by $1.7 billion over ten years and curtail access to free and reduced-price school meals. The proposals would make it harder both for school districts with high-poverty areas to offer free meals to all students and for families to continue receiving free or reduced-price meals for which they have been approved.

The Community Eligibility Provision, enacted in 2010, allows high-poverty schools to offer breakfast and lunch at no cost to all students. By eliminating the need for schools to collect, process, and verify school meal applications, it increases school meal participation, reduces administrative work, and eliminates unpaid meal fees.[8] Even though all students receive meals at no charge, only a portion of the meals are considered free meals for purposes of reimbursement. The President’s budget would impose stricter rules about how school districts can group schools to offer community eligibility across communities or district-wide. This change would make it much harder for districts that serve high concentrations of low-income students to offer community eligibility district-wide or to group schools to accommodate district priorities, such as offering comparable benefits across neighborhoods or grades.

At schools that don’t offer community eligibility, most students approved for free meals are enrolled automatically, based on data from another program; the remaining families complete an application and school districts verify the information on a sample of applications.[9] If families do not provide the information requested, their children lose their free or reduced-price meals. Because research shows that a substantial portion of households that don’t respond to the verification request and therefore lose benefits are actually eligible, the sample has been capped at 3 percent since 2004. The program combines verification with other program integrity tools, like reviews of meal service and administrative practices, to improve the accuracy of eligibility determinations and reimbursements.

The President’s budget would eliminate the 3 percent cap, allowing school districts to verify as many applications as they choose and requiring them to verify at least 8 percent unless they meet certain performance measures. While some of the budget’s proposed changes in how districts conduct sampling and the kinds of performance measures they are incentivized to meet could be steps in the right direction if carefully designed, unfettered verification would cause substantial numbers of low-income children to lose the free or reduced-price meals for which they qualify.

In addition to these proposed cuts to food assistance, the budget calls for numerous other cuts that would take away health coverage and other assistance that helps low-income families meet basic needs, including:

At the same time, the budget would permanently extend the 2017 tax law’s tax cuts for individuals, which confer large benefits on high-income taxpayers and heirs to multi-million-dollar estates. Extending the tax cuts set to expire at the end of 2025 would cost $1.4 trillion over the rest of the decade.

The budget’s combination of tax cuts and program cuts would shift resources to those who already have high incomes, substantial wealth, or both. This would disproportionately harm households of color, which tend to have lower incomes and wealth due to historical and ongoing discrimination and unequal educational opportunities. As a result, the budget would increase income inequality and widen racial disparities.

[1] The budget contains a gross SNAP cut of nearly $185 billion over ten years. It allocates an additional $2.5 billion over ten years for new state administrative costs associated with distributing proposed food boxes known as “America’s Harvest Boxes,” which leaves a net cut of about $182 billion. The estimates throughout this paper are based on the Fiscal Year 2021 Budget of the U.S. Government, https://www.whitehouse.gov/omb/budget/, and the “Explanatory Notes” the Department of Agriculture (USDA) provides to Congress, https://www.obpa.usda.gov/32fns2021notes.pdf. Many provisions in the 2021 budget were also in prior years’ budgets and in the House’s 2018 farm bill. Congressional Budget Office estimates of the President’s 2018 budget proposals for SNAP can be found at https://www.cbo.gov/system/files/2019-05/55215-snap.pdf.

[5] In addition to the SNAP cut, the budget would eliminate funding for LIHEAP, which provides roughly $3 to $4 billion a year to help many low-income households offset a portion of their utility costs.

[6] For detail on the other proposals for SNAP benefit cuts that were also in the last two budgets, see Rosenbaum et al., op. cit.

[7] The average match rate is slightly less than 50 percent in most states, but on the margin (i.e., for each additional dollar that a state spends on these activities), every state now receives a 50 percent federal match.

[9] For more information on the verification process, see Zoë Neuberger, “Testimony of Zoë Neuberger, Senior Policy Analyst, Before the House Education and the Workforce Subcommittee on Early Childhood, Elementary, and Secondary Education” Center on Budget and Policy Priorities, May 19, 2015, https://www.cbpp.org/food-assistance/testimony-of-zoe-neuberger-senior-policy-analyst-before-the-house-education-and-the. 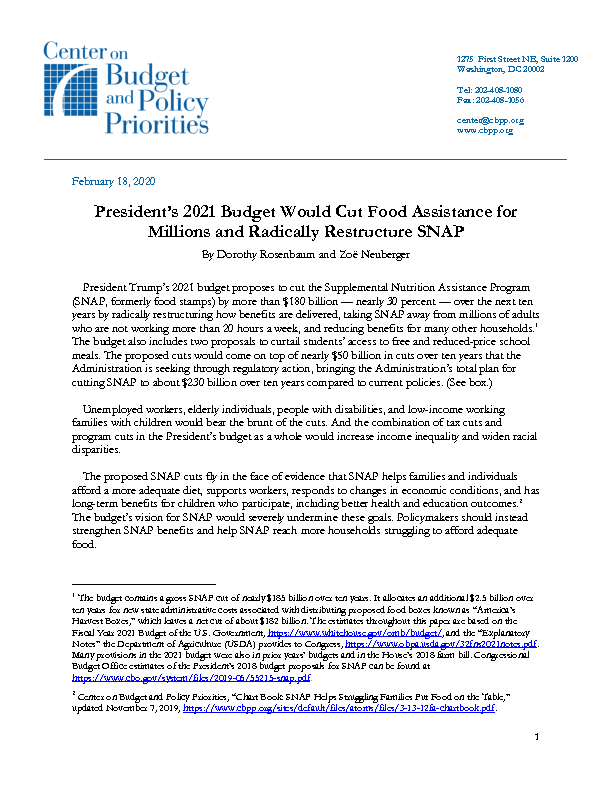