The tax framework that the Trump Administration and congressional Republican leaders announced on September 27 includes massive tax cuts that overwhelmingly benefit high-income and high-wealth individuals.  Proponents claim they will create jobs and boost economic growth; for example, Treasury Secretary Steven Mnuchin claims that that the framework would help the economy “get back to sustained 3 percent GDP or higher, which adds literally millions and millions of jobs.” In reality, tax cuts for high-income people and corporations won’t likely lead to substantial job growth and could even cost jobs.[1]

These facts don’t prove that tax cuts are bad for jobs or that tax increases lead to job growth; many other factors affect the economy and job creation.  But they dispel claims that large tax cuts are a silver bullet for job creation and will create “millions and millions of jobs.”

Careful empirical research finds that, contrary to overstated “supply side” predictions, tax cuts on high-income people’s earnings or income from wealth (such as capital gains and dividends) don’t lead to substantial job growth. 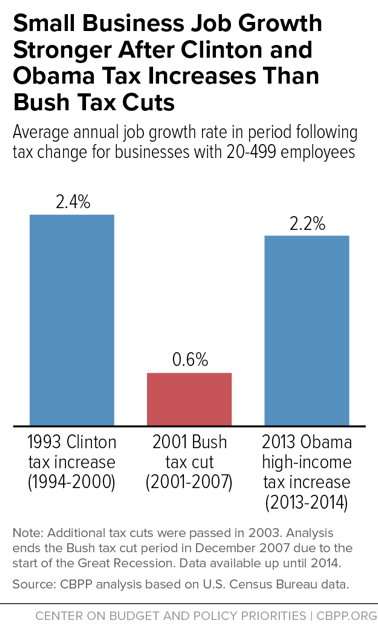 Proponents of high-income tax cuts often argue that small businesses create most new jobs and face unfairly high tax rates if organized as “pass-through” businesses such as partnerships, S corporations, and sole proprietorships.  However, these claims are misleading:

Tax Cuts for Wealthy and Corporations Could Hurt Workers

Huge tax cuts for the wealthy and corporations could actually hurt growth and the majority of Americans.  If they aren’t paid for, the increased deficits would reduce national saving, meaning less capital would be available for investment in the economy and interest rates could rise — and wages could fall.

Further, deficit-financed tax cuts would eventually have to be paid for through increases in other taxes or cuts to government services. Social Security, Medicare, and low-income programs would be especially vulnerable, and the fiscal squeeze would mean fewer resources for additional needed investments in areas like infrastructure and education that could help the economy, jobs, and wages over time. Given these eventual financing costs, unpaid-for tax cuts for the wealthy and corporations would likely leave most Americans worse off in the long run.

What Really Is the Evidence on Taxes and Growth?