Efficient, effective policies to reduce greenhouse-gas emissions work in part by raising the prices of fossil-fuel energy products to encourage energy efficiency and the substitution of clean energy sources for fossil fuel. This is essential to prevent extensive environmental and economic damage from climate change. However, it will raise costs to consumers for a wide array of products and services, from gasoline and electricity to food, mass transit, and other products or services with significant energy inputs.

The cost increases will pose special challenges for low- and moderate-income households because, as Congressional Budget Office studies have shown, they spend a larger share of their budgets on energy than better-off households do. Using methodology developed by CBO and data from the Bureau of Labor Statistics’ Consumer Expenditure Agency, we estimate that households in the poorest fifth of the population would, on average, face an estimated $750, a year in added costs (in today’s dollars) if emissions were reduced 15 percent below projected levels, which is a modest emissions-control target. These households have average income only modestly over $13,000. Moreover, those added costs would grow over time as the emissions-control targets become stricter. Most climate-change bills before Congress would phase in increasingly aggressive targets over a number of years, a step that most environmental policy experts believe is necessary.

If left to fend for themselves, these households will experience significant hardship trying to pay the higher bills. Many will slip into, or be driven deeper into, poverty. Fortunately, as a separate Center analysis (and CBO analyses) indicate, well-designed climate-change policies can provide sufficient revenue to cushion the impact on vulnerable households so that increases in poverty do not occur, as well as to address other public needs related to climate change. (See the box on page 3 of the full-text PDF.)

Making sure that sufficient resources are available to shield low-income households from increased poverty and hardship is critical in the design of climate-change policies. It is, however, only the first step. It also is vital to use the resources made available for this purpose in a way that is effective in reaching low-income households, efficient (with low administrative costs), and consistent with energy conservation goals. At this early stage of the debate, no climate-change legislation introduced on Capitol Hill meets this goal, although there is a growing interest among a number of lawmakers in finding effective ways to protect low-income people from increased costs.

This paper examines how to design effective mechanisms to meet this goal. It proposes a set of standards that any mechanisms should meet and explains why various proposals suggested to date do not meet these standards. 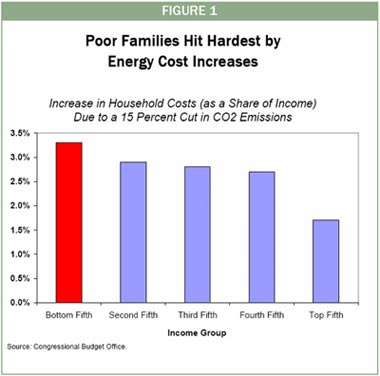 The paper also outlines a two-pronged approach to protecting low-income consumers that entails providing a “climate-change rebate” to low-income households through established electronic benefit transfer (EBT) systems (a debit card system states use to deliver certain low-income benefits), in combination with targeted tax relief through the Earned Income Tax Credit. This would protect millions of low-income Americans from higher energy costs, avoid missing significant segments of the low-income population, and entail very low administrative costs. To fill any remaining gaps and promote weatherization of poor households’ homes, this approach should be supplemented by increases in the Low-Income Home Energy Assistance Program (LIHEAP) and the Weatherization Assistance Program (WAP).

Finally, the paper shows how this approach could be modified to reach much of the middle class as well, if resources allow.

[2] For a description of the CBO methodology that the Center used to estimate the impacts of climate-change policies on consumers’ budgets, see Terry Dinan and Diane Lim Rogers, “Distributional Effects of Carbon Allowance Trading: How Government Decisions Determine Winners and Losers,” National Tax Journal, June 2002.

[3] Chad Stone and Matt Fiedler, “The Effects of Climate-Change Policies on the Federal Budget and the Budgets of Low-Income Households: An Economic Analysis,” Center on Budget and Policy Priorities, October 24, 2007, https://www.cbpp.org/10-24-07climate.htm.