Unlike in previous months, millions of families won’t receive a Child Tax Credit payment on the 15th of January due to Congress’s failure so far to extend last year’s temporary expansion of the tax credit. The monthly payments have enabled parents to cover basic costs ranging from food to electric bills, reducing families’ stress and leaving fewer children hungry when they go to bed at night. The expansion has been a remarkable success and, if continued, is projected to reduce annual child poverty by more than 40 percent as compared to child poverty levels in the absence of the expansion. But unless Congress restores the expansion, the payments will be taken away this year along with the rest of the expansion, putting 9.9 million children at risk of falling back into or deeper into poverty. (Table 1 below gives state-specific estimates.)

The American Rescue Plan Act boosted Child Tax Credit benefits for more than 65 million children by raising the maximum credit (to $3,600 for children under age 6 and $3,000 for older children), including 17-year-olds for the first time, and — most importantly — making the credit “fully refundable.” This last change meant that children in families with the lowest incomes, who stand to benefit the most, received the same amount as children in families with higher incomes. Previously, 27 million children, including roughly half of Black and Latino children and half of children living in rural areas, received less than the full credit or no credit at all because their families’ incomes were too low.

The Rescue Plan also authorized the Treasury Department to issue advance payments of half of the credit to families on a monthly basis from July to December 2021, rather than solely as a lump sum at tax time. Census Bureau data show how these monthly payments have helped families with low incomes, in particular, meet their basic needs. The vast majority of families with incomes under $35,000 spent some or all of the payments on necessities — housing, food, clothing, and utilities — and education. (See graphic. Table 2 has state-specific estimates.) So did many households with incomes above $35,000, though their share was smaller since they face fewer difficulties affording the basics. 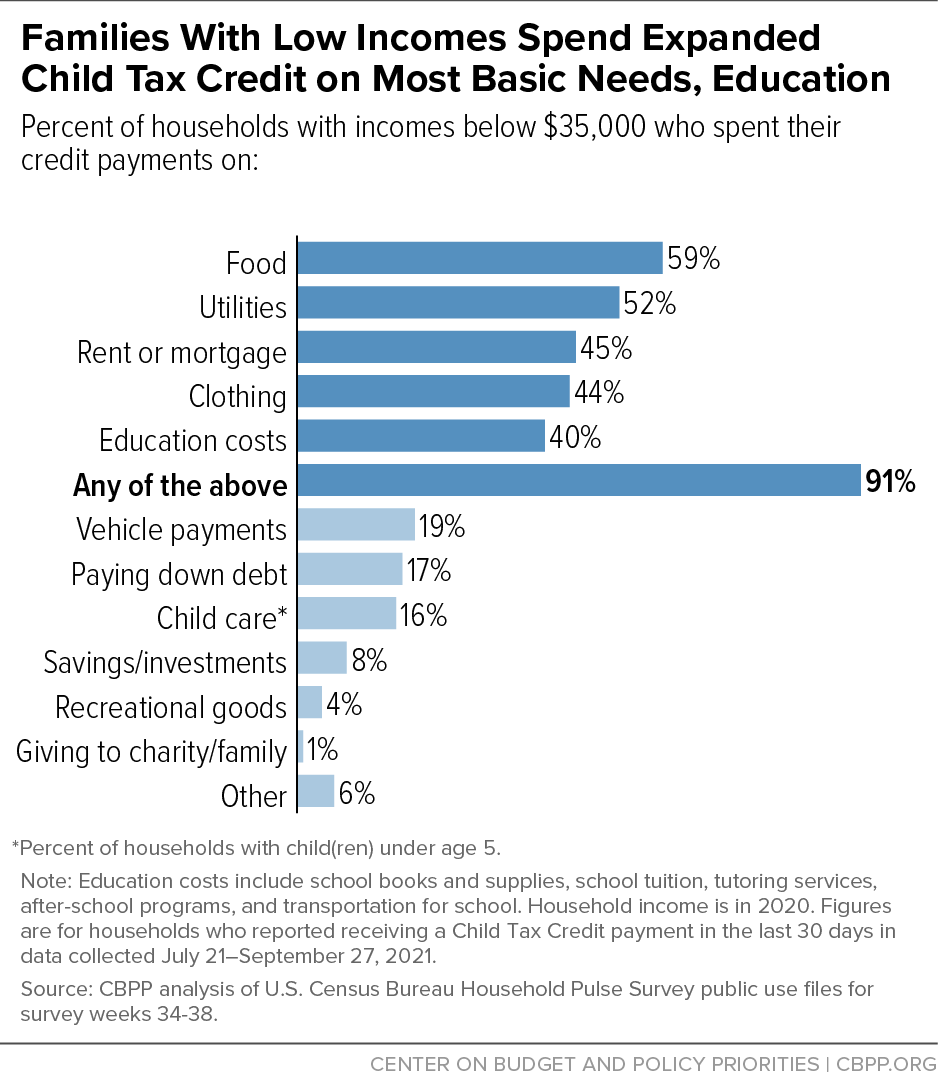 News reports from across the country have captured parents’ stories about how much the payments mean to their families and their deep anxiety over the monthly payments being taken away. For example:

To see what the loss of the Child Tax Credit expansion means to individual families, consider these examples:

Middle-income families will also see a large cut in their Child Tax Credit, though they will lose less than many low-income families. For instance, a married couple with 8-year-old twin daughters, where one spouse makes $50,000 as a property manager and the other makes $25,000 as a part-time home health aide, was eligible for an expanded Child Tax Credit of $6,000 for 2021. With the expansion expiring, they’ll receive a total credit of $4,000 — a loss of $2,000 per year.

The timing of the loss of monthly Child Tax Credit payments is particularly harsh. Many parents are missing work due to the steep rise in COVID-19 cases — they or a family member are ill or required to quarantine, for example, or their children’s school or child care provider had to close partially or entirely. When people with lower-paid jobs miss work, they often have no paid leave and their family budget can quickly become even tighter.

Rather than turn last year’s success into failure, Congress should make it a historic, lasting one. The Build Back Better bill makes the most important Child Tax Credit expansion — full refundability — permanent and extends the full expansion for one year. The House passed it; the Senate should now do its part. Families are counting on it.

Notes: Estimates reflect a pre-pandemic economy, using tax year 2021 tax rules and incomes adjusted for inflation to 2021 dollars. The Total U.S. row comprises the 50 states and the District of Columbia; it does not include U.S. Territories.

9 in 10 Families With Low Incomes Are Using Child Tax Credits to Pay for Necessities, Education

Parrott: House Takes Historic Step; Senate Should Get Build Back Better Across Finish Line Without Delay