The 2015 funding bill for the Departments of Transportation and Housing and Urban Development (HUD), which the Senate Appropriations Committee approved yesterday, is a significant improvement over its House counterpart but still falls short in major respects.

As we’ve reported, the across-the-board sequestration cuts eliminated housing vouchers for some 70,000 low-income families in 2013.  Congress provided enough funding in 2014 to restore roughly half of those lost vouchers.

But the 2015 spending bill that the House Appropriations Committee approved on May 21 would likely lock in the loss of more than 70,000 vouchers in 2015.  The Senate bill provides only $26 million more than the House bill to renew vouchers in use in 2014.  This means that, like the House bill, the Senate bill provides enough funding to renew all vouchers in use this year only if housing agencies either don’t use their available 2014 funds to restore lost vouchers this year or freeze subsidies in spite of rising rent and utility costs.

In other words, the bill would either lock in the loss of more than 70,000 vouchers (see graph) or require families with meager resources to absorb significant increases in housing costs next year. 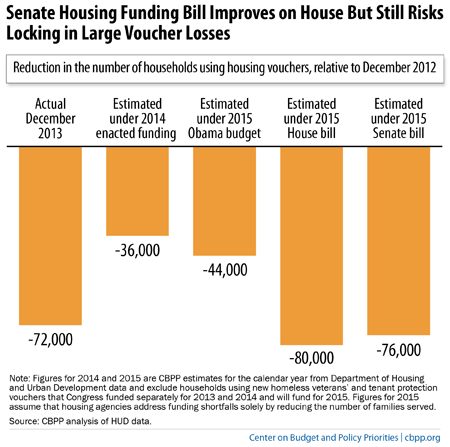 Also like the House bill, the Senate bill would make little progress against homelessness.  While both bills include $75 million for new rental assistance for homeless veterans and the Senate bill raises homeless assistance grants by $40 million over last year’s level, the latter is only enough to renew existing grants.  And any progress against homelessness is doubtful if Congress locks in sequestration cuts in vouchers, which are an important part of state and local efforts to reduce homelessness.

In some other areas, the Senate bill made significant improvements over the House bill with the roughly $1 billion more for HUD housing and community development programs it had available.  (The Senate Appropriations Committee allocated $2.4 billion more for the Transportation-HUD bill as a whole than the House did.)  The key areas of improvement include:

To be sure, Congress faces severe budgetary constraints in writing the fiscal year 2015 appropriations bills.  Yet policymakers should place high priority on protecting key safety net programs, including rental assistance programs — which enable more than 5 million low-income families to avoid homelessness and other hardships.

Congress should do more to protect low-income families as the House and Senate bills move forward in the next two weeks.

February 26, 2014
PreviousMore on Why Schools Are Adopting Community Eligibility
NextIn Case You Missed It…
Stay up to date
Receive the latest news and reports from the Center