Trump Proposes Immediate, Severe Cuts to Low- and Moderate-Income Programs — They Then Get Far Worse

The deep cuts that President Trump’s budget proposes to low- and moderate-income programs — the deepest such cuts that any modern President has ever proposed — not only would have severe consequences for health care, housing, job training, and other programs in their first year. The cuts also would grow considerably with each passing year, ultimately chopping the nation’s key low-income health program (Medicaid) nearly in half and federal spending on the nation’s key food assistance program (SNAP, formerly food stamps) by nearly one-third.

The budget would cut low- and moderate-income programs by 6 percent, or $52 billion, in 2018 alone. For next year, that would leave 14 million more people uninsured (because the budget embraces the House bill to repeal the Affordable Care Act); eliminate 250,000 housing vouchers for rental assistance; and end entire programs such as the Social Services Block Grant (which funds a range of services for low-income people) and the Low Income Home Energy Assistance Program (which helps poor households, particularly seniors and families with children, pay high heating bills), among other consequences.

The cuts then would grow far worse. As the chart below shows, in 2027, the budget would cut overall spending on low- and moderate-income programs by 33 percent or $440 billion — that is, more than five times larger than the 6 percent cut in 2018. Further, the cuts would continue to grow after the first decade.

Much of this increase reflects accelerating Medicaid cuts, as the figure also shows. The budget would cut Medicaid by 5 percent in 2018, but the cuts would reach 47 percent in 2027. This program now assists 77 million people every month, many of whom would lose their health insurance due to these cuts.

The cuts to other programs would grow as well. Overall spending on low- and moderate-income non-defense discretionary programs — which supports housing, training and employment, child care, and education, and which has already been tightly constrained in recent years — would be reduced by 40 percent in 2027, compared to an 8 percent cut in 2018. Training and employment programs would be cut particularly sharply. The cuts to SNAP would also escalate after 2018. Trump’s plan would abandon the national commitment to provide low-income people enough food aid for everyone to afford a basic diet in 2020 by forcing states, for the first time, to cover an average of 25 percent of the costs and, as part of this cost shift, allowing states to cut benefit levels as a cost management tool. In 2027, it would cut federal SNAP spending by 31 percent.

All in all, basic health, food, housing, job training and other upward mobility programs, as well as other essential aid, would shrink significantly one year from now and would be dramatically smaller a decade from now. 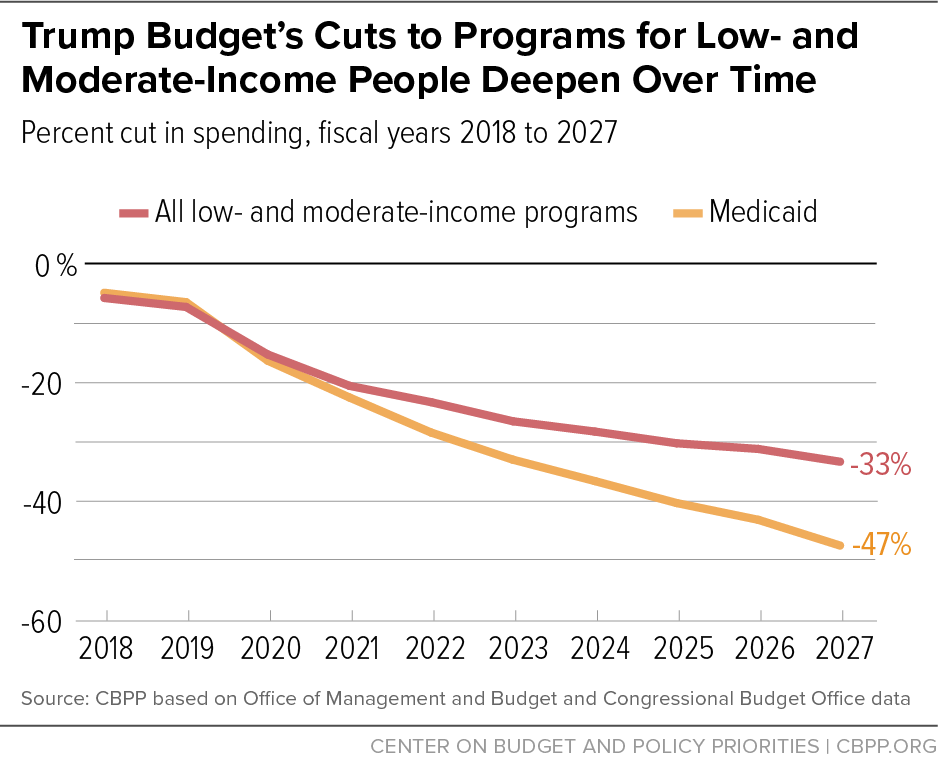 Contrary to Rhetoric, Trump Budget Would Make It Harder for Many to Climb Economic Ladder

May 26, 2017
PreviousThe Empty Promise of Work Requirements
NextTrump Proposals Would Cripple Efforts to Reverse Opioid Epidemic
Stay up to date
Receive the latest news and reports from the Center