President Trump’s budget should lay to rest any notion that he’s looking out for the millions of people that the economy has left behind.  He proposes steep cuts in basic health, nutrition, and other important assistance for tens of millions of struggling Americans even as he calls for extremely large tax cuts for the nation’s wealthiest people and profitable corporations. Inequality and poverty would grow significantly worse while deficits, when honestly measured, would rise.

The budget would cut health assistance to low- and moderate-income people by $1.85 trillion over ten years: (1) $1.25 trillion from the House bill to “repeal and replace” the Affordable Care Act (ACA) that the budget endorses — which would take health insurance from 23 million people, raise out-of-pocket health costs for millions more, and substantially weaken key protections for people with pre-existing conditions — and (2) $610 billion of additional Medicaid cuts on top of that.

The budget includes roughly $275 billion in other cuts to entitlement programs over ten years that help struggling families and elderly and disabled people afford the basics.  It would:

Non-defense discretionary (NDD) appropriations fund priorities including education, scientific research, public health, housing assistance, and basic government operations.  The budget slashes NDD by $54 billion below the already austere level for 2018 and a remarkable $1.6 trillion over the next decade.  That would take NDD spending in 2018 to its lowest level as a percent of the economy in six decades. By the end of a decade, NDD as a percent of the economy would be at its lowest level since the Hoover Administration or earlier. These programs have already been hit hard over the past seven years, due largely to the 2011 Budget Control Act’s tight caps on non-defense and defense appropriations and further “sequestration” cuts below those levels. The President’s budget would magnify that austerity many times over.

It calls for steep cuts in a broad array of investments and public services.  For example:

Trump’s tax plan would shrink federal revenues by roughly $5 trillion over ten years, based on our analysis of Tax Policy Center estimates, with the tax cuts largely flowing to the wealthy and profitable corporations.  The top 1 percent would receive annual tax cuts averaging more than $250,000 apiece, while low- and moderate-income families would receive little or nothing.  At least 17 million working families and individuals would be excluded from any tax benefit. The plan contains costly proposals skewed to the top that would:

The budget relies on gimmicks totaling roughly $7 trillion over the next decade, so no one should take its claims of fiscal probity seriously.

What to Expect Next

While Congress never adopts a President’s budget in total, many commentators have suggested that the Trump budget is “dead on arrival” in Congress.  But this understates its potential influence on coming budget debates. 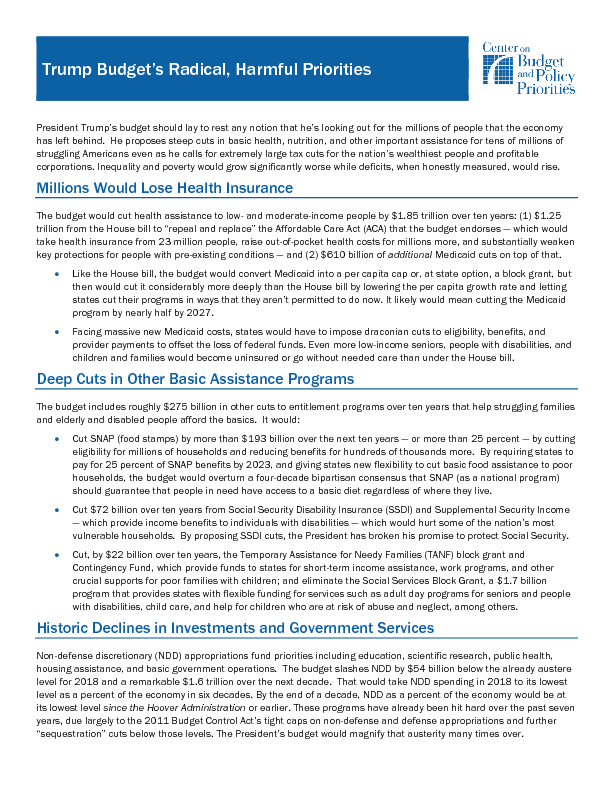