Under President Trump’s proposal to raise rents by up to $1,800 a year on the poorest households receiving federal rental assistance — virtually all of which have annual incomes of less than $7,000 — roughly 1.7 million people (including nearly 1 million children) would face eviction, hardship, and homelessness.

The proposal would raise rents on people receiving rental assistance from the Department of Housing and Urban Development (HUD) in several different ways. One is by raising the “minimum rent” for assisted households. Currently, assisted households generally must pay 30 percent of their income for rent. Public housing agencies, however, may require households to pay a minimum rent of up to $50 per month, and households in Section 8 Project-Based Rental Assistance pay a minimum rent of $25 per month — even if that exceeds 30 percent of their income. The Trump proposal would raise the monthly minimum rent for any household with an adult younger than 65 who is not considered disabled to at least $150 and make it mandatory. That would triple the rent for affected households now paying a $50 minimum. (The proposal would set the minimum rent at $50 for households where all members are 65 or older or have a disability, including in the supportive housing programs for the elderly and people with disabilities, which now have no minimum rent.)

The $150 minimum rent proposal would affect only the poorest people receiving federal rental assistance, raising rents on some 1.7 million people, including 970,000 children. The number of children in severe poverty has grown substantially since the mid-90s, in part because the safety net’s erosion for families with children has left many such families with little or no income when they’re jobless. Many of the other affected adults have been homeless or may have physical or mental health conditions, or limited education, that make it difficult to find or sustain employment.

The typical affected household is a mother with two children with an annual income of $2,400 — just $200 per month. After paying rent under this proposal, the family would have only $50 for necessities like clothing, personal care items, diapers, or school supplies, as well as food or medical needs that aren’t met by other assistance. 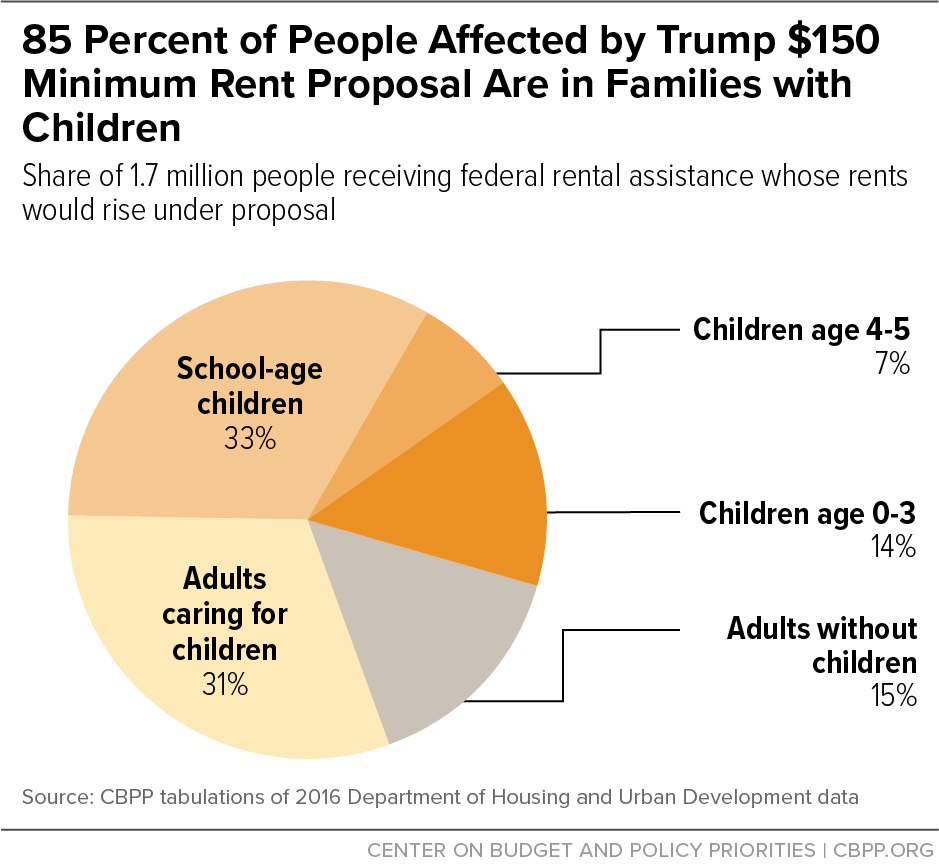 While affected families may be eligible for hardship exemptions from having to pay the higher minimum rent, very few assisted families receive such exemptions in practice. Households have to request an exemption, but eligible households may not know that exemptions are available or how to apply if the housing agency doesn’t adequately publicize the policy. There’s little reason to expect that to change under a higher minimum rent policy, as HUD has not complied with a 2016 congressional directive to certify that existing protections are being enforced.

A $150 mandatory minimum rent would put the lowest-income families and individuals at risk of eviction and even homelessness, which is particularly harmful to children. Rental assistance programs are designed to help low-income families rent decent housing at an affordable cost. This proposal does the exact opposite by raising the rent on the most vulnerable HUD-assisted households.

HUD's Role in Rental Assistance: An Oversight and Review of Legislative Proposals on Rent Reform

March 16, 2018
PreviousTrump Plan Would Raise Rents on Working Families, Elderly, People With Disabilities
NextIn Case You Missed It…
Stay up to date
Receive the latest news and reports from the Center