New York Governor Andrew Cuomo proposes to extend the state’s “millionaires’ tax,” which raises $4 billion a year, for five years, but lawmakers should go further by strengthening the tax and making it permanent.

As our recent report explains, millionaires’ taxes are a proven way for states to raise revenues for vital investments, such as good public schools and quality infrastructure, without harming their economies. New York, in particular, has done very well since enacting the higher rate at the top in 2009: its economy has outperformed its neighbors on all three measures we analyzed (see chart). 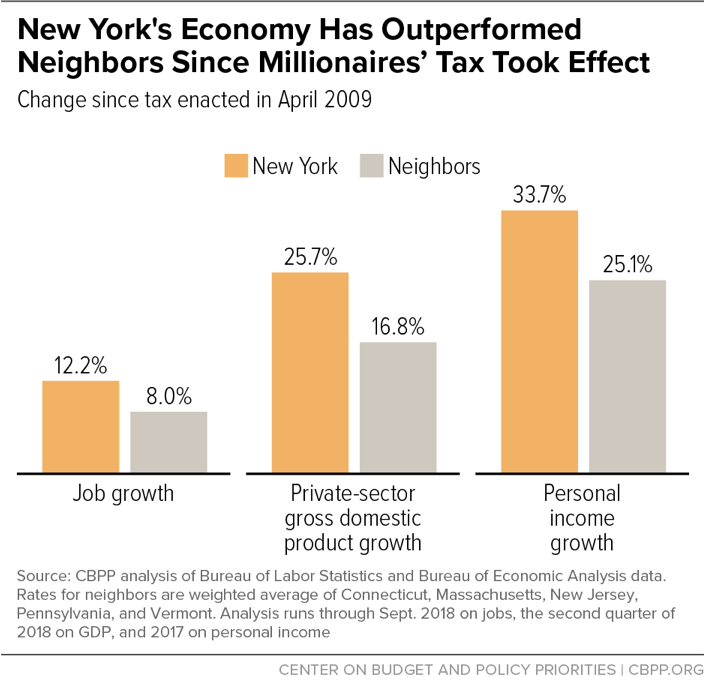 Policymakers enacted the millionaires’ tax to avoid harmful budget cuts stemming from the Great Recession. They set it at 8.97 percent on all income above $500,000 but, in 2012, scaled it back to 8.82 percent on income above $1 million for individuals and $2 million for married couples filing jointly, adjusted annually for inflation.

At a bare minimum, New York should permanently extend the tax in its current form to reinforce the state’s finances, especially since another recession is inevitable at some point.

But a bolder approach could enable policymakers to better invest in New York’s future. A 2017 proposal from the State Assembly’s Democratic majority called for creating three new brackets on incomes above $5 million, $10 million, and $100 million, as well as revising the current tax to collect more revenues on incomes between $1 million and $5 million.

These changes could raise an estimated $2 billion from a small sliver of taxpayers at the top who have done very well in recent years. And it would enable New York to follow states like California and Minnesota, which used new revenues from millionaires’ taxes for ambitious investments in early education, access to college, and other services that bolster long-term growth. For example, new revenues could go a long way toward fully funding New York’s K-12 public schools, which have received $4.1 billion less since 2007 than the state’s education funding formula requires, according to the state Board of Regents. Or, policymakers could make free full-day kindergarten a reality for the more than 80,000 4-year-olds across the state, mostly outside New York City, who don’t have access to it.

Most high-income people are firmly rooted in their communities, with deep personal ties and professional networks that make relocating less attractive than it might seem. That may be especially true in New York due to its rich cultural amenities, distinct business environment, and high quality of life. And, many New Yorkers whom the cap would affect recognize the value of strong school systems and other investments requiring adequate revenue.

Moreover, since the 2017 tax law provided such large tax breaks for those at the top, most households affected by the SALT cap and millionaires’ tax still received overall net tax cuts – often very large ones. The richest 1 percent of New Yorkers, those with annual incomes starting at about $890,000, are slated to receive a roughly $30,000 tax cut from the bill in 2019, on average. Meanwhile, the number of millionaire tax returns in New York rose by 72 percent between 2009 and 2016.

As New York’s budget-writers hammer out the details for how best to meet the state’s needs, renewing and strengthening the millionaires’ tax provides a sensible way to fund quality public services today and make bold investments in the future, while also saving enough for a rainy day.

How States Can Tax Wealth

February 7, 2019
PreviousIn Case You Missed It…
NextK-12 Funding Up in Teacher-Strike States, But Room for More Growth
Stay up to date
Receive the latest news and reports from the Center