As states continue to turn the corner on the Great Recession, policymakers in a number of states are looking to help low-paid working families by creating or expanding refundable state earned income tax credits (EITCs). These credits build on the federal EITC, which promotes work, helps families make ends meet, lifts them out of poverty, and yields lasting benefits for kids, studies show. 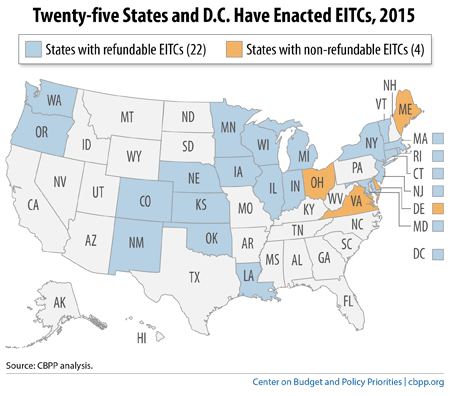 States are smart to use one of our most effective tools to ensure working families recover along with the economy.  State EITCs allow state lawmakers to leverage the power of the federal credit at a relatively low cost.

Share
Facebook Twitter Print Email
PreviousIn Case You Missed It . . .
NextBernanke, Bernstein, et al. on Full Employment
Stay up to date
Receive the latest news and reports from the Center