The Senate Appropriations Committee-approved 2019 budget for the Internal Revenue Service (IRS) would further weaken the agency’s ability to serve taxpayers and enforce the 2017 tax law. At $11.3 billion, the committee’s proposed level for the IRS is below the 2018 funding level — which is already too low and which is 18 percent below the 2010 level adjusted for inflation.  The Senate committee isn’t alone in proposing inadequate IRS funding, as the House Appropriations Committee-approved level and President Trump’s proposal are also below the inflation-adjusted 2018 level.  But the Senate committee’s is the lowest among them.

IRS funding has steadily eroded since 2010 (see figure), yet the agency’s challenges continue to grow. Continued declines (after adjusting for inflation) in IRS funding would only further weaken the agency, embolden tax cheats, and harm honest taxpayers. 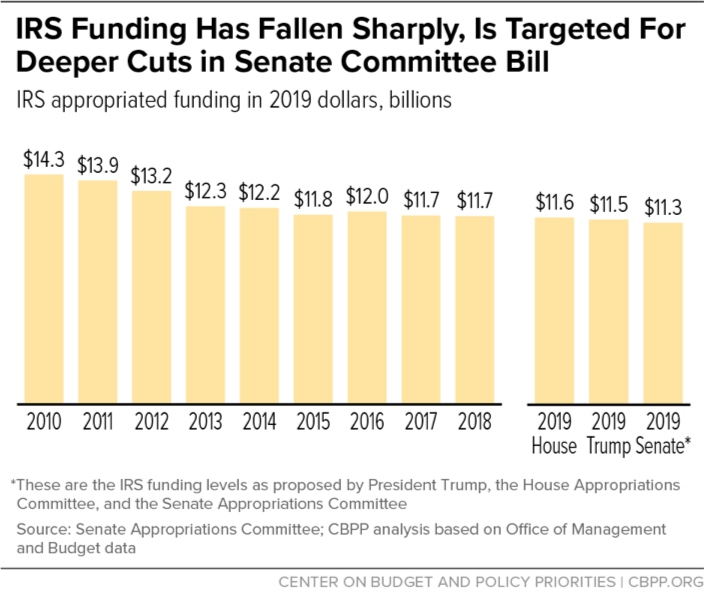 Because of these reductions, the IRS doesn’t have enough employees to answer the phones, to conduct outreach and education, or to provide basic taxpayer service. The compliance and enforcement side of the [agency] has been cut by even more. So, in addition to answering the fewest number of enterprise-wide taxpayer calls in recent memory, the IRS also has the lowest individual audit rate in memory (0.6 percent) and its collection actions are way down. In fact, the IRS has suppressed collection notices because it doesn’t have the resources to handle the incoming phone calls and correspondence prompted by those notices.

The IRS would continue to struggle under the Senate bill.  Particularly worrying, the bill would freeze funding for tax enforcement at the 2018 level, without adjusting for inflation; at that level, it would be roughly $1.6 billion (25 percent) below the 2010 level in inflation-adjusted terms. The enforcement division absorbed nearly 14,000 of the agency’s roughly 18,000 staff losses from 2010 through 2017, which has driven a sharp decline in audits.

Unfortunately, the Senate committee didn’t adopt the President’s proposal to add enforcement funding — $362 million in 2019 and more in later years — that wouldn’t count against the 2011 Budget Control Act’s annual caps on overall funding for non-defense appropriations. “Cap adjustments” like this have a long bipartisan history.  Tax enforcement raises significantly more money (in the form of enhanced payments from taxpayers) than it costs, so it makes sense to exempt some enforcement dollars from the funding caps.

Inadequately funding the IRS could carry a high cost.  Given the 2017 tax law’s complex provisions and the hasty way it was drafted, it will likely fuel aggressive efforts by some businesses and wealthy individuals to push the law’s outer limits, and possibly beyond, to minimize their taxes. Also, further cuts to an already under-resourced agency could undermine the public’s trust that tax laws will be enforced.  Congress should give the IRS the resources it needs to do its job.