A new bill introduced by Senators Todd Young and Chris Van Hollen would give hundreds of thousands of children a better chance of long-term success by helping their families afford rental housing, including housing in areas with quality schools and other opportunities that promote healthy child development.

The bill, the Family Stability and Opportunity Vouchers Act, would create 500,000 new Housing Choice Vouchers over five years for families with young children that are experiencing homelessness or other housing instability, or living in areas of concentrated poverty. In addition to help paying the rent, families would receive support services that have a proven track record of helping families that wish to do so to move to high-opportunity neighborhoods such as landlord outreach, mobility counseling, and home visiting services. State and local housing agencies would receive funding to provide some of these services, and they’d partner with community agencies to provide others.

This proposal would expand low-income families’ access to stable, affordable housing and communities with low crime rates, quality schools, and other advantages — benefits that a body of research shows significantly boost children’s chances of growing up to be healthy, productive adults.

High housing costs coupled with low, often volatile incomes put enormous strain on families. If they fall behind on rent, families may be evicted or forced to move — in some cases several times in a given year — or even end up homeless. About 6 million families with children struggle to pay rent and other expenses, including about 150,000 families who spend part of the year in a shelter.

High housing costs also compel too many families to rent in neighborhoods where buildings are poorly maintained, streets and playgrounds are unsafe, and schools are under-resourced and underperforming. Roughly one-third of children in poor families — and nearly half of children in poor Black families — live in high-poverty neighborhoods. While there’s good evidence that many such families would like to move to communities with strong schools and other advantages for their children, high rents and other barriers often prevent them from doing so.

Numerous studies find that children who experience housing instability or grow up in severely disadvantaged communities are much likelier to have a range of poor outcomes, including higher rates of cognitive, behavioral, and mental health problems; physical health problems such as asthma; poor school performance; and lower incomes as adults. (Summaries of some of this research are here, here, and here.)

Rigorous research also shows, however, that housing vouchers sharply reduce housing instability and homelessness, as well as associated hardships. For example, one study found that homeless families that received a housing voucher had significantly lower rates of food insecurity and domestic violence, and their children were less likely to be placed into foster care.

Groundbreaking work led by Harvard economist Raj Chetty has highlighted neighborhoods’ impact on children’s long-term outcomes, as well as the benefits of helping families move to higher-opportunity areas. One study found, for example, that young children in low-income families that used a housing voucher to move from deeply poor neighborhoods to lower-poverty areas were much more likely to attend college and less likely to become single parents, and they earned significantly more as adults, compared to similar children in other families (see chart). A new study by Chetty and the Opportunity Insights team has also demonstrated both that many low-income families want to live in areas that offer their children advantages, and that a robust package of mobility services that includes landlord outreach and mediation, tenant counseling, and help with moving expenses can help families overcome barriers and successfully move to better neighborhoods.

The Family Stability and Opportunity Vouchers Act would use these evidence-based strategies to help hundreds of thousands of low-income families afford decent housing in communities of their choice, including in low-poverty areas with strong schools and other opportunities. The bill would have substantial positive effects: it would sharply reduce homelessness among families with children and enable as many as 1 million children the chance to grow up in safer communities with strong schools, giving them a better chance to grow up to be healthy, productive adults. 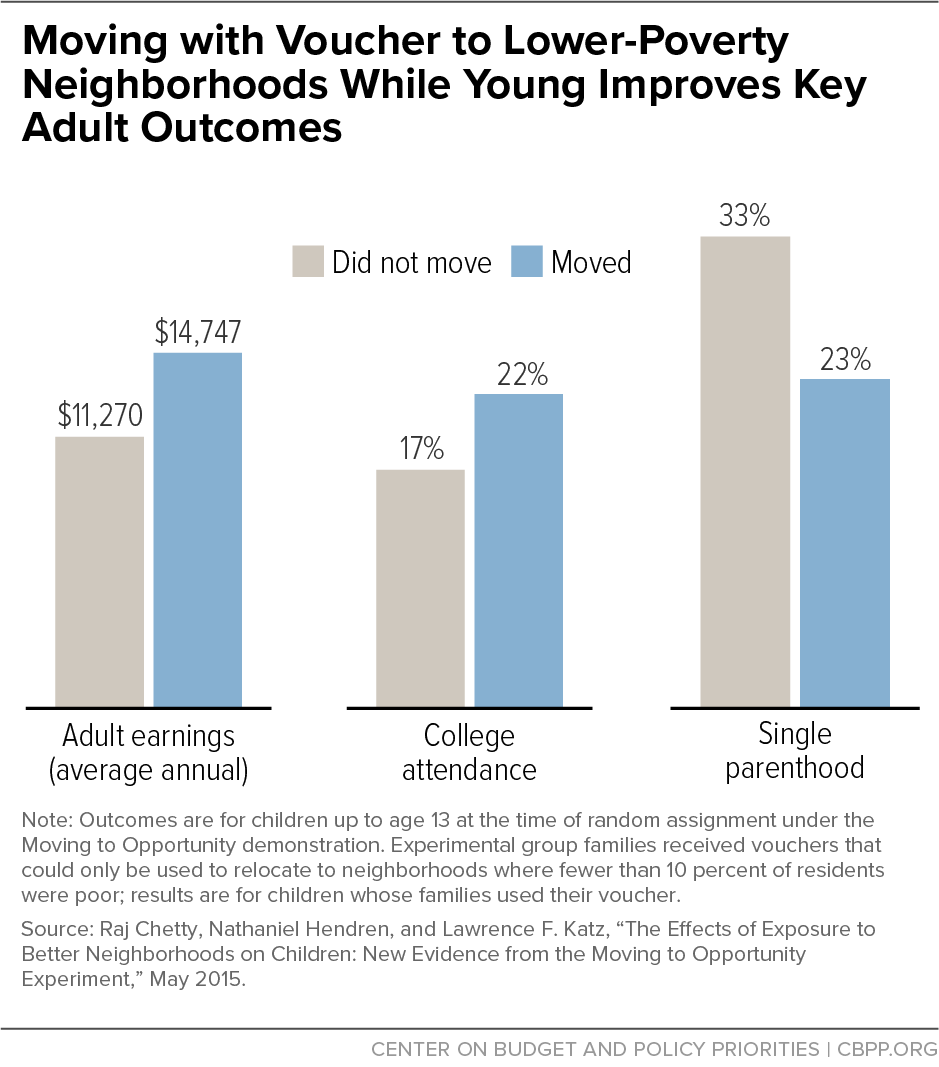 July 24, 2018
PreviousIn Case You Missed It...
NextNew Jersey Driver’s License Measure Is Its Latest Inclusive Policy for Immigrants
Stay up to date
Receive the latest news and reports from the Center