As this week’s New York Times vignettes from teachers themselves show, school funding debates in states across the country must include an important piece of the funding puzzle: money to build new — and repair old — schools. Improving the schools in which children learn is one key to creating good jobs and promoting broadly shared economic growth.

State cuts in K-12 education funding over the past decade have affected more than schools’ operating budgets for teacher salaries, textbooks, and so on. Capital spending — funding to build new schools, renovate and expand facilities, and equip schools with more modern technologies — also fell sharply in most states (see chart). 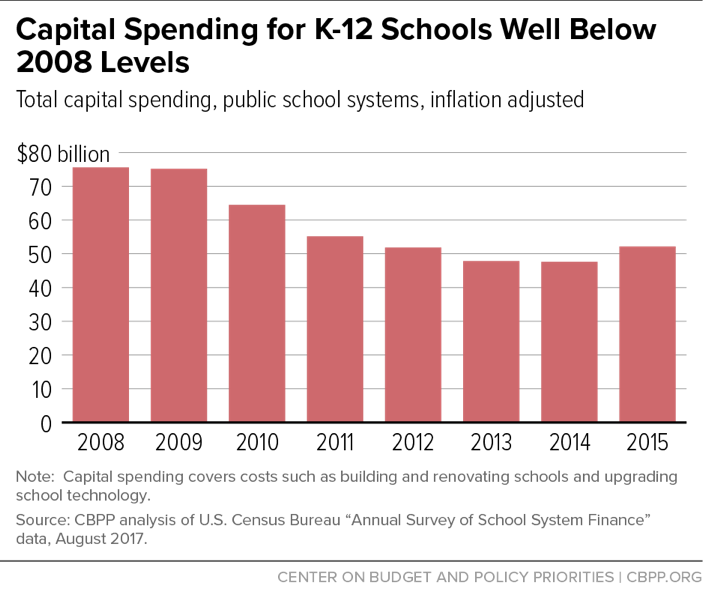 The nation is $46 billion a year behind what it should spend on building and repairing K-12 schools to provide healthy and safe modern facilities, according to a 2016 report from the 21st Century School Fund, the National Council on School Facilities, and the U.S. Green Building Council.

This disrepair weakens the nation’s long-term prosperity. That’s why the federal government should help address this critical need. But President Trump’s infrastructure plan falls short by cutting federal investment and relying heavily on private investment, which would likely leave out school improvements. The Senate Democrats’ Jobs & Infrastructure Plan for America’s Workers, on the other hand, includes $40 billion for public schools. In addition, the plan would target funding for school buildings and other infrastructure to the areas that need it most and where there’s a lack of local resources.

States shouldn’t wait for the White House and Congress to act, however. States, along with cities and counties, can use many tools, from borrowing to taxes, to build and repair school facilities. It’s time to use them.