Endorsing House Ways and Means Chairman Dave Camp’s proposal to limit the mortgage interest deduction recently, Budget Chairman Paul Ryan explained that it “ought to be a middle class tax break, not something for higher-income earners.”  He’s right to criticize the deduction for favoring those at the top but, while Camp’s proposal moves in the right direction, policymakers should go further.

The deduction, which Camp would limit to mortgages up to $500,000 (cutting the current $1 million limit in half), is ripe for reform (see graph).  Some 42 percent of its benefits go to households with incomes above $200,000, the Joint Tax Committee estimates, while only 8 percent go to households with incomes below $75,000.  Close to half of homeowners with mortgages don’t benefit at all because they either don’t owe federal income taxes (though they typically pay substantial payroll taxes and/or state and local taxes) or don’t itemize deductions. 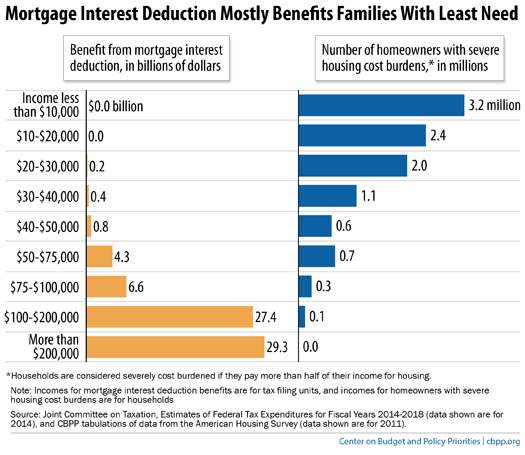 Federal housing spending as a whole is poorly matched to need, and policymakers could do more to rebalance it if they not only capped the deduction for the largest mortgages but also converted the deduction to a credit worth a fixed percentage of a household’s mortgage interest.

Several bipartisan plans — including those from President George W. Bush’s tax reform panel and the chairs of President Obama’s fiscal commission, Erskine Bowles and Alan Simpson — have backed this approach, which would trim benefits for higher-income households while expanding them for many middle- and lower-income households.

Policymakers should redirect part of the savings from reforming the mortgage interest deduction (after deficit-reduction goals are met) to help low-income renters, for example by creating a renters’ tax credit.  Low-income renters — including elderly people, people with disabilities, and working-poor families with children — are more likely than other groups to struggle to keep a roof over their heads, but federal housing policy provides far more help to homeowners and higher-income households.

Putting Housing Money Where the Need Is

The Need to Rebalance Federal Housing Policy: Time for a Renters’ Tax Credit