The mortgage interest deduction is one of the largest federal tax expenditures — it costs the federal government about $70 billion a year — yet it appears to do little to achieve the goal of expanding homeownership.  This tax break needs reform, as we explain in a new paper.

The bulk of the deduction’s benefits go to higher-income households who generally could afford a home without assistance:  in 2012, 77 percent of the benefits went to homeowners with incomes above $100,000.  Meanwhile, the deduction provides little benefit to the middle- and lower-income families who are most likely to struggle to afford homeownership (see chart) — and no benefit at all to more than a third of homeowners with mortgages. 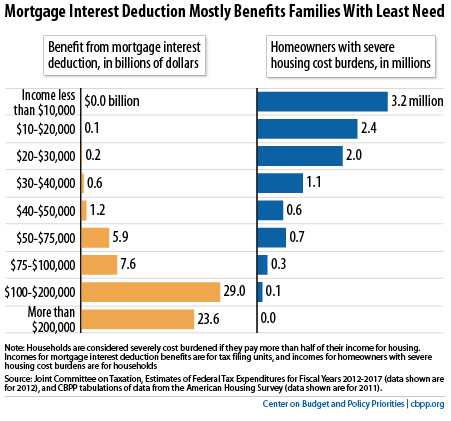 Three major bipartisan panels have proposed converting the deduction to a credit and lowering the maximum amount of interest that it covers.  These reforms would be major improvements over current law and would generate significant additional revenue.

Putting Housing Money Where the Need Is

The Need to Rebalance Federal Housing Policy: Time for a Renters’ Tax Credit