As part of a robust response to Puerto Rico’s economic crisis, federal policymakers should let workers on the island qualify for the Earned Income Tax Credit (EITC) because Puerto Rico is tailor-made for the pro-work EITC — with its high poverty and unemployment and especially with its low official labor force participation.  The EITC draws people into the labor force, boosting jobs and earnings, and reducing poverty, thereby improving the lives of millions of workers and their families.

Senate Finance Committee Chairman Orrin Hatch recently called for“tax incentives . . . [to] incentivize growth and labor force participation” in Puerto Rico.  The EITC is that tax incentive, a proven policy success that policymakers can easily extend to workers on the island.

Together with the Child Tax Credit, the EITC lifts more children out of poverty than any other federal program by drawing people into the workforce and supplementing their hard-earned wages.  Workers receive the credit starting with their first dollar of earnings, and the credit rises with each added dollar of earnings until it reaches its maximum level.

The EITC expansions in the 1990s were the single largest factor behind the impressive increase in employment among single mothers in that decade — larger, in fact, than the employment gains attributed to the 1996 welfare law — a leading study found.

The chart sums up Puerto Rico’s need for an EITC, showing that 61 percent of residents aged 25-64 are working or looking for work — well below the 78 percent rate for the United States as a whole.  In fact, Puerto Rico’s labor force participation is lower than any state’s. 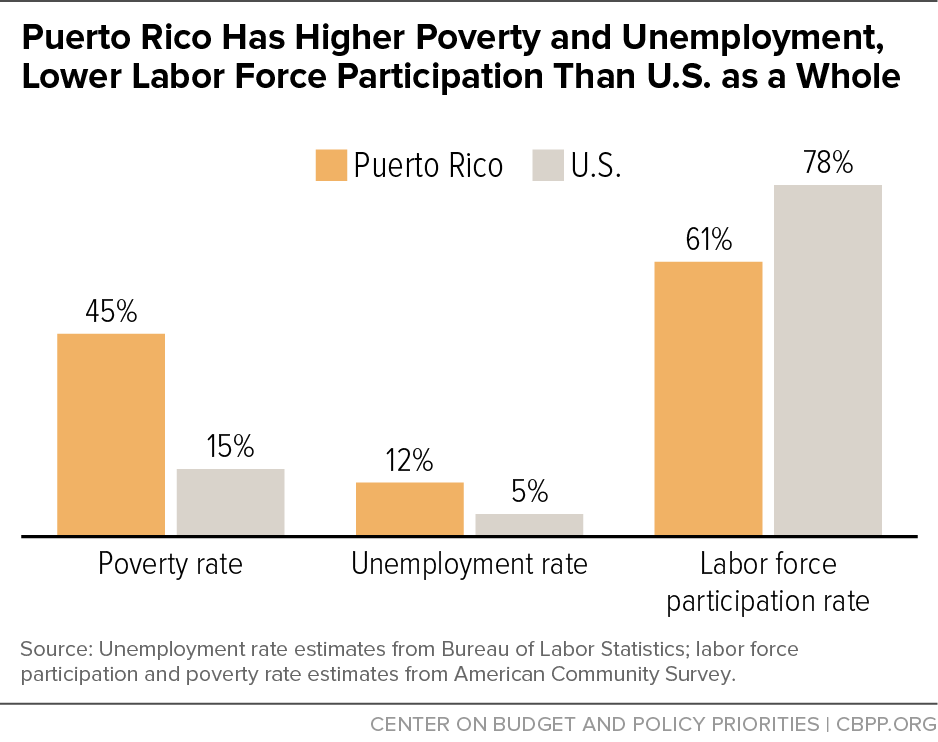 Policymakers should remember that while workers in Puerto Rico do not pay federal income taxes, they pay Social Security taxes, and a key rationale for the EITC is to help offset both taxes for low-income working families.  Policymakers also should note that Puerto Ricans who move to the United States qualify for the EITC, and the current disparate treatment depending on where they live provides an incentive for migration to the detriment of Puerto Rico’s struggling economy.

Policymakers should seize the opportunity to deliver the EITC’s pro-work benefits to Puerto Rico.