On Tax Day, 9 Charts on the System’s Inequities — and Plans to Address Them

Another unusual, extended tax season is in the books, but taxpayers can otherwise expect much of the same, with high-income and -wealth filers enjoying special tax breaks unavailable to most others. On Tax Day, here are 9 charts that show some ways in which the current system favors those with high incomes and wealth, along with some Biden Administration proposals to make the tax system fairer while generating revenues to finance critical investments for an equitable and robust recovery.

The first chart compares enacted Child Tax Credit expansions and a proposal to tax capital gains for households with more than $1 million at the same rate as wages and salaries. (Capital gains are currently subject to lower rates.) Every working-class family with qualifying children, across races and ethnicities, will receive an income boost from the credits, while 0.3 percent of taxpayers — some of the wealthiest — would be asked to pay more.

The need for more equitable taxation is clear. The share of income flowing to the top 1 percent of people has nearly doubled in recent decades, from 7.4 percent in 1979 to 13.5 percent in 2017, according to the Congressional Budget Office. In percentage terms over this period, the incomes of the top 0.01 percent have increased by 12 times the amount of the middle three-fifths of income earners.

Wealth, like income, became even more concentrated through 2019, as the chart above shows. And the “billionaire boom” has continued through the pandemic as “the wealth of nine of the country’s top titans has increased by more than $360 billion in the past year.” It’s striking to consider how little of their income will show up on their tax returns this year. In fact, there’s a good chance that much of their and other wealthy people’s incomes will never face taxation if the law isn’t changed.

High-income and -wealth households get much more of their income from sources such as capital gains and pass-through income (which the owners of firms such as partnerships and sole proprietorships report on their individual tax returns). Income from these sources enjoys generous benefits that can dramatically lower tax bills and that are generally unavailable to the vast majority of Americans. These benefits include:

Deferral: Wealthy people don’t have to pay tax on much of their income each year because they can “defer” taxes on their capital gains if they don’t sell the assets that have gained value. This explains why some of the wealthiest people use lines of credit to support their lifestyles — they’re avoiding having to pay taxes.

Stepped-up basis: In addition to deferring the income tax they’d otherwise owe each year, wealthy households can use the “stepped-up basis” loophole to essentially erase any deferred income tax on unrealized capital gains on their final tax return.

Capital gains income is extremely concentrated among those with the highest incomes, as the above chart shows. The American Families Plan would change two of the three major tax advantages that this income enjoys.

For households with incomes over $1 million, it would eliminate the special discounted rate for capital gains and dividends that are sold and would tax these at the same top income tax rate of 39.6 percent as income from salaries. It also would require wealthy people to pay income tax on deferred capital gains income above $1 million (or $2 million for a couple, plus special exemptions for personal residences) when they die, significantly weakening the stepped-up basis loophole.

The Biden plan otherwise doesn’t touch deferral. It would still let wealthy people go from year to year without paying income tax on capital gains they accrue if they don’t sell their assets. Deferral lets wealthy people such as Jeff Bezos and Warren Buffett pay extremely low effective tax rates on this income, as we explain here.

The American Jobs Plan, meanwhile, would partially reverse the deep corporate tax rate cut enacted by the 2017 law and strengthen that law’s international tax regime to reduce profit shifting to tax havens. Recall that the 2017 tax law cut the corporate tax rate from 35 percent to 21 percent, which has had a huge cost and no discernible economic benefit (see chart).

President Biden proposes to raise the corporate rate to 28 percent and invest the revenue in rebuilding our decaying infrastructure and increasing scientific research. This would be a good trade for the country, finds Moody’s Analytics: “Despite the higher corporate taxes and the larger government deficits, the plan provides a meaningful boost to the nation’s long-term economic growth.”

The third way in which the Biden plans would raise revenue, in addition to focusing on high-income individuals and corporations, is by rebuilding the IRS and addressing the tax gap. Since 2010 the IRS’s budget, particularly for its enforcement division, has been cut sharply, as the chart above highlights.

These deep budget cuts have reduced by 39 percent the ranks of the auditors who focus on the most sophisticated returns, causing a plummet in audits of wealthy individuals (see chart) and large corporations.

President Biden is proposing an $80 billion infusion to restore the IRS and upgrade its systems. Importantly, the money would be locked in over multiple years to provide the IRS with the budget certainty it needs to rebuild. We explained how such a “mandatory” funding stream would work in a recent paper.

Biden’s proposals would also provide the final essential element of tax compliance: information. There’s a strong and well understood connection between information reporting and tax compliance, as the chart above shows. The Biden plan would help fill a glaring information reporting gap by requiring financial institutions to report gross in-flows and out-flows of bank accounts, just like they report interest and dividends today. Simply including these two new boxes on 1099 forms would help the IRS over time collect more legally owed tax on income that goes unreported today. 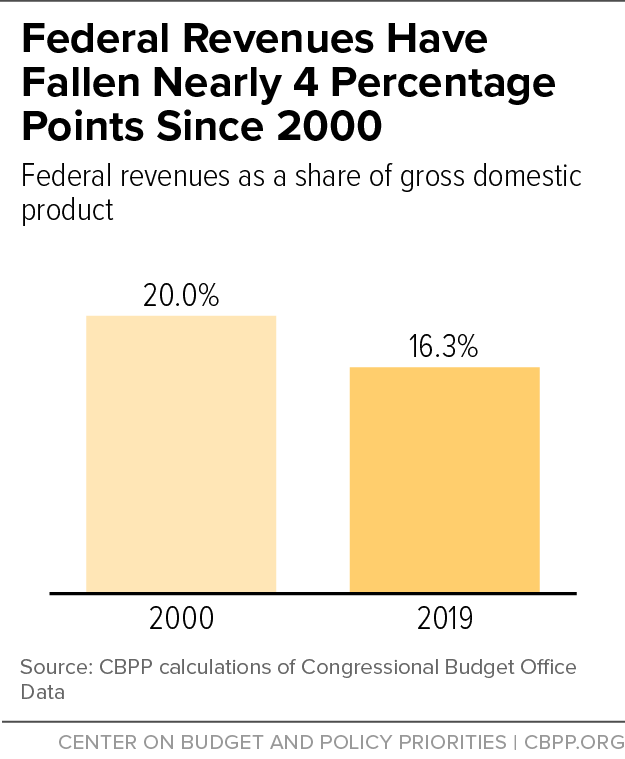 The final result of many of the last two decades’ policy choices — tax breaks for high income and wealth, worsened tax enforcement, and large, regressive tax cuts during the Bush and Trump Administrations — has been greater inequality and a weakened revenue base. In 2019, after two decades of these tax cuts, revenues stood at just 16.3 percent of gross domestic product (GDP), compared to 20 percent of GDP in 2000. (See chart.)

Study after study has shown supply-side tax cuts to be an economic and fiscal failure. One recent global study concluded: “[M]ajor reforms reducing taxes on the rich lead to higher income inequality as measured by the top 1 [percent] share of pre-tax national income. The effect remains stable in the medium term. In contrast, such reforms do not have any significant effect on economic growth and unemployment.”

The Biden Administration’s proposals recognize the failure of supply-side tax cuts for the wealthy and corporations and are designed to invest in an equitable and robust recovery — and a tax system that isn’t so skewed to those with high income and wealth.

Biden Proposals Would Reduce Large Tax Advantages for Those at the Top, Address Tax Gap

May 25, 2021
PreviousRestore SNAP for People With Drug-Related Convictions
NextStates Should Act Quickly for New Home- and Community-Based Services Funding
Stay up to date
Receive the latest news and reports from the Center