The paper on tax reform options that the Senate Finance Committee issued yesterday includes CBPP’s proposal for a renters’ tax credit to help the poorest families afford housing.  Such a credit would be a valuable complement to the existing Low-Income Housing Tax Credit (LIHTC).

A renters’ credit would help rebalance the nation’s housing policy, as well as its housing-related tax subsidies.  The federal government spends more than $200 billion annually to help families pay for housing.  But the bulk of that goes for homeownership tax subsidies (like the mortgage interest deduction) that favor higher-income families, most of whom could readily afford homes without assistance.

Meanwhile, growing numbers of low-income people pay very high shares of their income for rent, as the graph shows.  This forces them to divert resources from other basic needs and places them at risk of housing instability or homelessness, which can cause long-term harm to children’s health and educational outcomes.

Sharp cuts to federal rental assistance under the sequestration budget cuts, together with the 2011 Budget Control Act’s tight caps on annual discretionary funding, will leave even more families struggling to afford housing.  A renters’ credit would address some of these pressing needs. 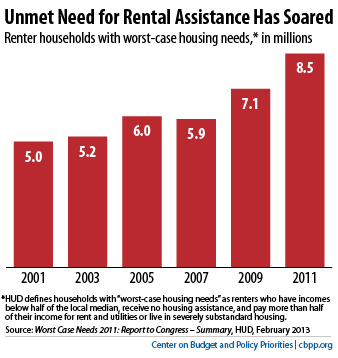 For two reasons, the renters’ credit should complement — not replace — the LIHTC, which policymakers created in the 1986 tax reform law to support the development and renovation of housing affordable to families with incomes roughly double the poverty line.

First, the LIHTC does not by itself typically make housing affordable to the poorest Americans, such as low-wage workers and the lowest-income elderly people and people with disabilities.  The renters’ credit would help these households afford rents in developments subsidized through the LIHTC and in other buildings.

Second, before creating the LIHTC, policymakers had long struggled to establish efficient, accountable subsidies for construction and renovation of affordable housing, an important need in many areas.  The LIHTC has performed well in this role, though it could be made even more effective.

Policymakers should streamline inefficient housing tax expenditures, such as the mortgage interest deduction, to better achieve their goals and generate revenues to contribute to balanced deficit reduction.  They should also use a portion of the savings (after meeting deficit-reduction needs) to address growing hardship among low-income renters by establishing a renters’ credit to complement the LIHTC.

November 1, 2012
PreviousHealth Reform Moves Forward as House Votes (Again) to Repeal
NextSNAP Enrollment Is Still So High Because the Job Market Is Still So Bad
Stay up to date
Receive the latest news and reports from the Center