| By Douglas Rice
The sequestration budget cuts will likely force state and local housing agencies to cut the number of low-income families using Housing Choice Vouchers to afford housing by roughly 140,000 by early 2014, as we explain in a new paper.  This represents a sharp break from Congress’ bipartisan commitment — which it has met for most of the voucher program’s nearly 40-year history — to renew assistance for at least the same number of families from year to year.  Meanwhile, thousands of other low-income families using vouchers could face sharp rent increases.
Image 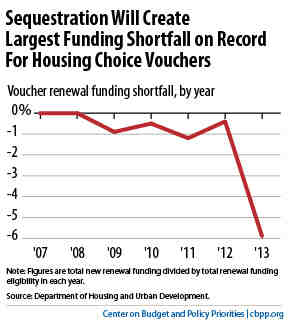 These cuts, which housing agencies have already begun to implement, will fall heavily on vulnerable people: The cuts come at a time when the number of low-income families that need housing assistance has been rising substantially, there are long waiting lists for vouchers in almost every community, and homelessness remains a persistent problem. Overall, sequestration will cut more than $2 billion in 2013 from the housing assistance and community-development programs of the Department of Housing and Urban Development.  While cuts in housing vouchers and homeless assistance will probably affect low-income families the most in the near term, sequestration will also contribute to further losses of public housing, impede the development of affordable housing for low-income seniors and people with disabilities, cause more low-income children to be exposed to lead-based paint in older rental housing, and cut counseling services for families at risk of foreclosure. Click here to read the full paper.
Related Posts:
Topics:
Federal Budget, Housing, Funding, Housing Vouchers