As they write final 2016 appropriations bills, policymakers will decide whether to include a proposal to sharply expand the Department of Housing and Urban Development’s Moving to Work (MTW) demonstration with almost no reforms to address its shortcomings.  As we’ve noted, policymakers should not expand MTW without significant reforms, including limits on state and local housing agencies’ ability to divert voucher funds from helping needy families rent housing.

Currently, MTW allows 39 housing agencies to get broad waivers of federal rules governing the public housing and Housing Choice Voucher programs and to shift funds to other purposes.  MTW agencies transferred close to a fifth of their voucher funds to other purposes in 2014, leaving 63,000 low-income families without vouchers (see chart).  Nevertheless, some policymakers want to give more agencies the flexibility to shift voucher funds, in part to allow transfers to purposes that received inadequate federal funding in recent years, such as maintaining or renovating public housing and covering voucher program administrative costs.  Policymakers should provide more adequate funding for these purposes. 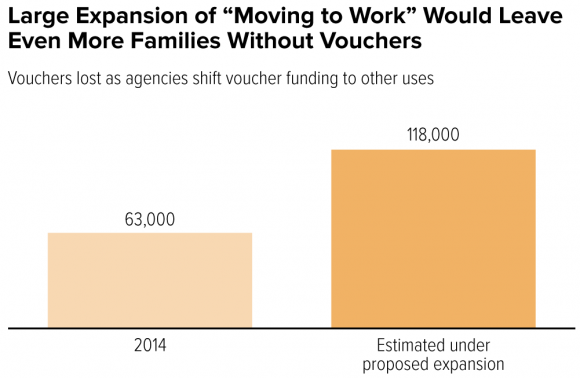 But allowing more agencies to divert voucher funds by expanding MTW in its current form is the wrong way to address those needs.  Here are three reasons why:

Policymakers shouldn’t expand MTW without also instituting reforms to ensure that the program doesn’t leave more vulnerable families without the help they need to afford housing.

March 24, 2016
PreviousAddressing Key Misconceptions About Social Security
NextSNAP Helps Millions on Thanksgiving — and Every Day
Stay up to date
Receive the latest news and reports from the Center