The Moving to Work (MTW) demonstration permits 39 state and local housing agencies to obtain broad waivers of federal rules governing the public housing and Housing Choice Voucher programs so they can test alternative policies related to work and other areas. MTW has fostered some useful innovations but has also had serious adverse effects. Congress should not expand it without significant reforms.

No Evidence of Increased Work

Despite its name, there is no evidence that MTW increases work overall, and almost none of the policies MTW agencies have adopted to promote work have been rigorously evaluated. In fact, working-age, non-disabled adults receiving rental assistance at MTW agencies were 4 percentage points less likely to work last year than those at non-MTW agencies. While this does not mean that MTW causes lower work rates, it casts serious doubt on claims that expanding MTW would boost employment.

The vast majority of recipients of rental assistance are children, seniors, and people with disabilities. Of those able-bodied adults who can work, most already do.

MTW allows agencies to shift federal funding for vouchers to purposes other than helping families rent housing, such as staff salaries or construction. Those funding shifts caused the loss of vouchers for 63,000 low-income families last year.

Proposals before Congress would sharply expand MTW to 300 new agencies and block planned reforms to the demonstration. This expansion could result in the loss of thousands more vouchers for families, seniors, veterans, and people with disabilities (see graph). 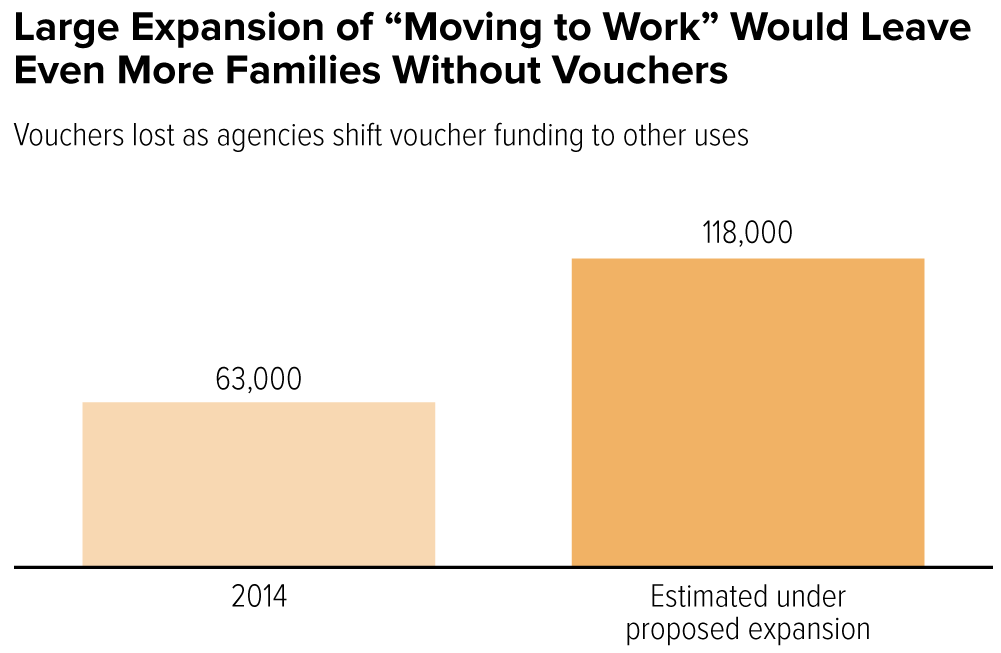 Vouchers not only sharply reduce homelessness but can allow families to move to lower-poverty, safer neighborhoods. This, in turn, can produce long-term benefits for families and children, including higher educational achievement and higher earnings later in life. Reducing the number of vouchers available to families leaves more vulnerable families facing serious hardship.

MTW allows agencies to sweep aside key protections for low-income families, exposing them to significant rent increases and limiting their ability to move to higher-opportunity neighborhoods. For example, MTW eliminates a requirement that agencies target most rental assistance on the lowest-income families. It also allows the U.S. Department of Housing and Urban Development (HUD) to waive rent limits designed to protect vulnerable families from homelessness or other hardship.

Most MTW agencies have raised rents on families with little or no income — sometimes by $150 a month or more, a difficult burden for families already struggling to make ends meet.

Lack of Oversight and Evaluation

The Government Accountability Office and HUD Inspector General have criticized the lack of evaluation and monitoring of the existing demonstration. HUD recently initiated a major evaluation of MTW, but the results will not be available until 2018 — making proposals to significantly expand MTW before 2018 premature. Moreover, a large-scale expansion would severely strain HUD’s capacity to provide effective oversight.

Moving to Work Should Not Be Expanded Without Major Reforms

A large MTW expansion would not only cause the loss of more vouchers due to funding shifts (see above), but also could pave the way for even more voucher cuts down the road. Unlike other agencies, MTW agencies receive voucher funding through block grants, and other low-income block grants have proven vulnerable to funding cuts over time.

The soundest policy would be to leave MTW at its current size. But if Congress expands MTW to more agencies, it should institute reforms at the same time to limit reductions in the number of families that MTW agencies assist, retain key tenant protections, and require rigorous evaluation of risky policies to protect families and taxpayer dollars.

Sources for graphics: CBPP analysis of Department of Housing and Urban Development data (Graphic 1); Office of Management and Budget (Graphic 2).

“Moving to Work” Housing Program Should Be Reformed, Not Vastly Expanded

June 29, 2015
Stay up to date
Receive the latest news and reports from the Center