Medicaid at 50: Restructuring Would Be Unpopular, Unjustified

As Medicaid turns 50, its critics will likely continue to call for fundamentally restructuring the program, by capping federal Medicaid funding through a block grant or establishing a per capita cap.  But these kinds of changes are unpopular and unjustified — and harmful, as they would shift significant costs to states, low-income beneficiaries, and health care providers and leave millions of people uninsured and underinsured, as we’ve warned. 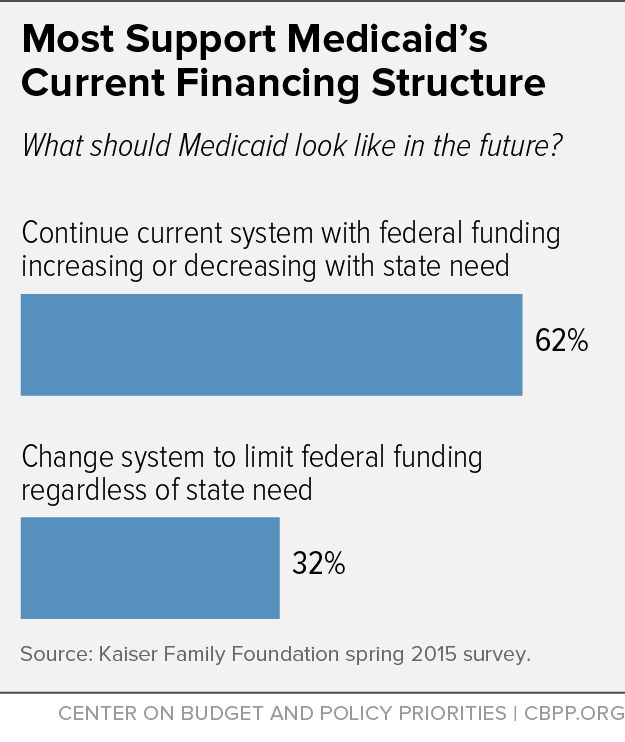 The public strongly opposes these types of proposals.  When respondents to a new Kaiser Family Foundation poll were asked about the future of Medicaid, the overwhelming majority (62 percent) supported continuing it as it is today, including its financing structure.  Only 32 percent favored limiting federal Medicaid funding by converting it into a block grant (see chart).

Medicaid spending trends don’t warrant such radical changes.  Medicaid is already efficient, as our recent analysis points out.  Its costs per beneficiary are substantially lower than for private insurance (after adjusting for differences in health status).  Over the past decade, Medicaid has grown slower than per-beneficiary costs under private employer coverage and is expected to grow no faster through 2023 than for people with private insurance.  In fact, the Congressional Budget Office now projects that Medicaid spending between 2011 and 2020 will be $335 billion — or 10 percent — lower than it projected in August 2010, largely due to slower expected growth in per-beneficiary costs.  (These projections exclude the impact of the Supreme Court decision making health reform’s Medicaid expansion optional for states.)

As Medicaid turns 50, learn more about how it improves access to health care, its long-term benefits, and why states should expand Medicaid: www.cbpp.org/medicaid-at-50.

Congressional Budget Would Add Tens of Millions to Ranks of Uninsured