How Big Are the Automatic “Sequestration” Cuts Scheduled for March 1?

Update March 4:  Click here for the Office of Management and Budget’s calculations of the cuts under sequestration.

We have slightly revised our estimates of the automatic budget cuts — known as sequestration — scheduled to begin March 1 under the “fiscal cliff” deal reached at the start of the year.  The table below lays out what will happen if sequestration, required by the 2011 Budget Control Act, takes effect as scheduled.

The fiscal cliff deal lowered the 2013 sequestration by $24 billion, from $109.3 billion to $85.3 billion.  This shrinks the percentage cuts in full-year funding for most programs subject to the automatic cuts.  However, the fiscal cliff deal did not affect the Medicare cut, which remains capped at 2 percent.

We are revising our detailed explanation of how the sequestration cuts are calculated to reflect the fiscal cliff deal and will issue it soon. 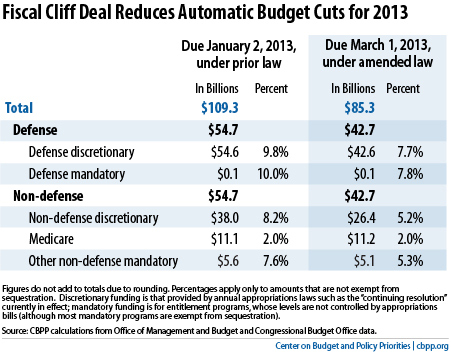 December 21, 2012
PreviousWhy Raising the Medicare Age Would Be a Step Backward
NextALEC’s Radical Tax and Budget Agenda
Stay up to date
Receive the latest news and reports from the Center