Why Raising the Medicare Age Would Be a Step Backward

On PBS’s “Need to Know” last week I participated in a panel discussion on how to preserve Medicare over the long term in the face of an aging population and rising health care costs.  In this exchange with host Ray Suarez, I explained why one proposal — raising the eligibility age to 67 — would raise costs, not reduce them:

RAY SUAREZ:  Raising the Medicare eligibility age from 65 to 67 would save the federal government, by some estimates, $148 billion through 2022.  Paul, that’s just the kind of question you’ve studied throughout your career, when you change a requirement like that, what the overall effect on the cost is.  Is it part of the answer?

PAUL VAN DE WATER:  No, it’s not part of the answer.  Not only would raising the age of eligibility for Medicare shift costs from the federal government to states, to individuals, but it would also actually increase total health care spending.  The Kaiser Family Foundation did a thorough analysis of this proposal not too long ago.  And it showed that the total increase in health care costs to the health care system overall from raising the Medicare eligibility age would be twice the savings to the federal government.  And that’s because Medicare is a relatively efficient program compared to other sources of insurance. 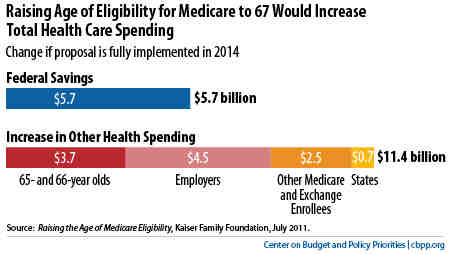 For more detail on the impact of raising the Medicare age, see our report, which includes this graph based on the Kaiser study. For a transcript of last week’s discussion, click here.
Related Posts:
Topics:
Federal Budget, State Budget and Tax, Budget Outlook, Health Reform, Coverage Trends, Medicare, Health
Previous$1.5 Trillion More in Deficit Savings Would Stabilize Debt Over Coming Decade
NextHow Big Are the Automatic “Sequestration” Cuts Scheduled for March 1?
Stay up to date
Receive the latest news and reports from the Center