If budget negotiators agree on a deficit-reduction deal, it could well include more cuts to the federal budget category that includes most grants to states and localities outside of Medicaid, on top of nearly $900 billion in cuts already enacted.  But, there’s been little public discussion about how exactly further cuts would hurt states and localities.

Last year’s Budget Control Act (BCA) imposed severe caps over the next ten years on non-defense discretionary funding.  As my colleague Nick Johnson has pointed out, the caps almost certainly will drive discretionary grants to states and localities far below historical levels.  Lowering the BCA caps further as part of a deficit deal could prove very damaging in areas such as: 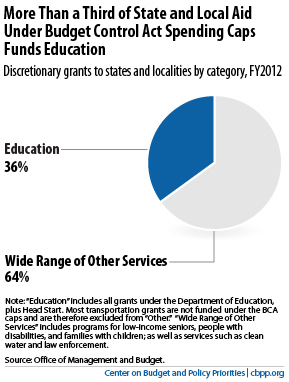 For States, Alternatives to “Fiscal Cliff” Could Be Even Worse

November 7, 2012
PreviousStates Cutting Red Tape in Health Programs
NextIn Case You Missed It...
Stay up to date
Receive the latest news and reports from the Center