The new Fiscal Survey of States from the National Governors Association and National Association of State Budget Officers (NASBO) warns, correctly, that state finances are too weak to absorb big cuts in federal grants for education, health care, disaster preparedness, and other services that a deficit-reduction agreement might impose. “What we’re really seeing here is there is not enough money to make up for any federal cuts,” NASBO Executive Director Scott D. Pattison told the New York Times. But the report misses a key point:  cuts in federal grants aren’t the possible outcome of a future federal deal; they’re almost certain to happen as a result of the funding caps that President Obama and Congress already enacted. As the graph shows, last year’s Budget Control Act caps will shrink grants to states from the “non-defense discretionary” part of the budget to far below historical levels.  And that’s not counting the automatic, across-the-board cuts (known as “sequestration”) scheduled to start taking effect in January as part of the “fiscal cliff,” which would cut these grants further.
Image 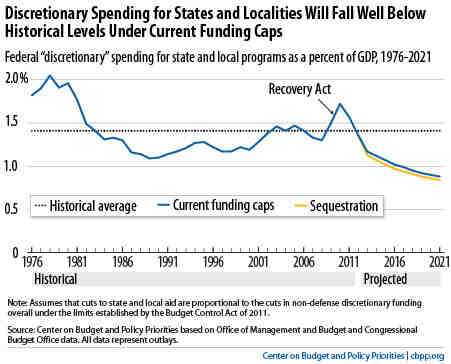 Any additional cuts in this area of the federal budget — which are inevitable if a deficit package doesn’t include significant new revenues — would only make things worse.
Related Posts:
Topics:
Federal Budget, Housing, State Budget and Tax
PreviousIn Case You Missed It...
NextTaxing Digital Downloads: A Few Coins for State and Local Coffers
Stay up to date
Receive the latest news and reports from the Center