The Supreme Court’s June ruling upholding health reform (the Affordable Care Act, or ACA) gives states the choice of expanding their Medicaid programs to cover most non-elderly individuals up to 133 percent of the federal poverty line.  Despite the benefits of the expansion, some governors have said their states will not or might not take it, citing in part the cost to their states’ budgets.

Some of these same governors, including Texas’ Rick Perry, also support the House-passed budget, which would shift very substantial costs to states and localities, as our recently released analysis explains.  These cost shifts would cost states far more than adopting the Medicaid expansion to cover substantial numbers of their uninsured residents.

For example, if all states take the Medicaid expansion, the cost to states would likely total about $1 billion in 2014, based on Congressional Budget Office (CBO) estimates.  That same year, the House-passed budget would cut an estimated $28 billion from federal funding for discretionary (i.e., non-entitlement) programs that states and local governments provide, including schools, water treatment, and law enforcement.  That does not include the additional cuts that the House budget includes in federal funding for state highway construction and other transportation projects, or the steep cuts that it would make in federal funding for state Medicaid programs.

To be sure, states adopting the ACA’s Medicaid expansion will pick up more of the costs of the expansion after 2016.  Those costs, however, would still be a modest fraction of the House budget’s cuts in federal funding for functions that states carry out.  Specifically, implementing the Medicaid expansion in all states would cost states about $73 billion over the next decade, according to CBO, an increase in state-funded Medicaid spending of about 2.8 percent.  In contrast, the House budget would reduce federal funding for schools and other state and local services by roughly $280 billion over the same period — and this doesn’t count the additional cuts in funding for state and local transportation projects.

The House plan also would convert Medicaid to a block grant and cut federal funding for the program by 34 percent by 2022 (compared to what federal Medicaid funding for states would be under current law) and by steadily larger amounts after that.  These cuts would total an estimated $36 billion in 2014 alone and $810 billion over the next ten years.  (These cuts would come on top of cuts in federal Medicaid funding for states that would result from the House budget’s call to repeal health reform.)  The cuts in federal funding for state Medicaid programs could be even deeper if enrollment rises due to a recession or medical costs rise faster than anticipated. 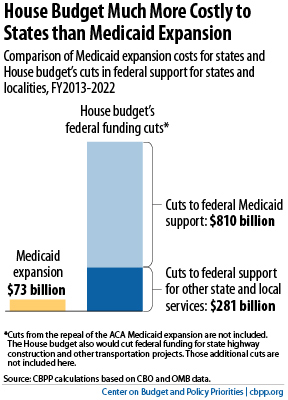 States would have to make up for the lost federal funds with higher state taxes, deep cuts in Medicaid services for low-income people, cuts in an array of other state services and programs, or a combination of such actions.  Because Medicaid is already very lean — it costs much less per beneficiary than private insurance does — and states already exercise considerable flexibility, claims that states could somehow provide Medicaid coverage so much more efficiently under a block grant that they would make up most or all of the lost federal funding that way are wholly unrealistic.

Governors concerned about the Medicaid expansion’s affordability but supporting the House budget should look more closely at the numbers.  They are questioning the relatively modest state costs of providing health insurance to many of their most vulnerable residents, but cheering a budget plan that would shift far larger costs to their states.

Why Is Labor Force Participation Shrinking?