Why Is Labor Force Participation Shrinking?

With the latest jobs report coming out Friday, the Congressional Budget Office’s (CBO) recent budget and economic update provides important context for one closely watched  figure:  the labor force participation rate. The percentage of people over age 16 who are working or actively seeking work has slipped fairly steadily for the past few years.  CBO says a big reason is “the economic downturn [and] weak growth in output during the recovery.”  In other words, the recession and lack of job opportunities have driven many people from the labor force. But, in a finding that has attracted little attention, CBO says that roughly half of the recent drop in labor force participation has occurred simply because more and more baby boomers are hitting retirement age.
Image 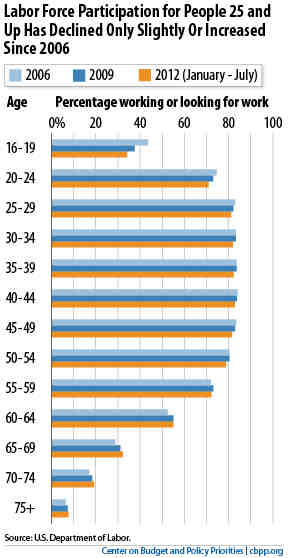 Labor market participation traditionally peaks between ages 25 and 54.  At those ages, roughly 80 percent or more of people are working or looking for work.  At younger or older ages, though, the percentage drops — tapering off to fewer than 10 percent of people 75 or older, as the graph shows. The graph also shows changes in labor force participation since 2006 within narrow age groups.  While participation has dropped among young adults, it has held pretty steady for those aged 25 and up and has actually increased at the oldest ages.  But the sheer number of baby boomers (the generation born between 1946 and 1964) moving into their retirement years has dampened the overall rate, as CBO confirms.  Researchers at the Chicago Fed and the Kansas City Fed bear out CBO’s analysis. Back in 2002, the Labor Department presented an alternative, age-adjusted measure of overall labor force participation.  We wish it would keep this series up to date and give it the same prominence as the overall rate.  That’d help policymakers and journalists understand the numbers. As we’ve written, misguided concerns about near-term deficits are standing in the way of stimulus measures that could improve labor force participation by boosting job creation.  Getting Americans back to work would raise incomes, reduce poverty, enhance retirement security, and lessen pressures on disability insurance and a host of other programs.  But, given the aging of the population, we’re unlikely to get back to the high participation levels of the late 1990s even if the economic recovery grows much stronger.