My post this week for US News & World Report discusses how policymakers’ unwillingness to enact additional fiscal or monetary stimulus — the result of exaggerated fears about deficits and inflation — is impeding the economic recovery.

On the fiscal side, I argue:

Fears that further temporary deficit-financed fiscal stimulus would precipitate a debt crisis seem misguided at a time when investors around the world want the safety of U.S. Treasury securities.  Comparisons between the U.S. situation and that of Greece or other southern European economies are off base.

On the monetary side:

Fears that further “quantitative easing” by the Federal Reserve to lower long-term interest rates will ignite inflation seem similarly off base.

Political gridlock limits Congress’s ability to act, so the Fed seems our best bet for action.

The Fed has a dual mandate — to promote stable prices and high employment.  The chart shows the unemployment rate compared with the Congressional Budget Office’s estimate of what it would be if the economy were operating at full capacity.  The chart also shows the 12-month inflation rate (how much higher prices are each month than they were a year earlier) compared with the Fed’s inflation target.  As the chart shows, in recent months inflation has been below the Fed’s target while unemployment remains well above a level that would be considered high employment. 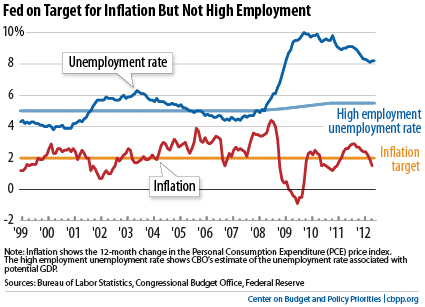 That’s a strong case for the Fed to use all the tools it has available to promote a stronger recovery and give unemployed workers a better shot at finding a job.

Yes, We Can Avoid Both a Recession and a Long-Term Debt Explosion

June 7, 2012
PreviousScare Talk on Medicaid Costs Doesn’t Square with Reality
Next5 Ways Waivers Will Strengthen Welfare Reform
Stay up to date
Receive the latest news and reports from the Center