The House is scheduled this week to take the next step to implement the Republican majority’s 2018 appropriations plan, which pairs a $70 billion increase above the 2017 level for defense with an $8 billion cut to non-defense programs. That unbalanced plan would fall far short of meeting national needs, as we detailed in a recent paper.

Before the August recess, the House Appropriations Committee approved all 12 regular appropriations bills for 2018, and the House passed a package of four of those bills that included essentially all of the defense increase. Now the House is scheduled to consider a second package of the remaining eight measures, which contain most of the non-defense cuts.

We’ve illustrated some of the ways in which the committee-approved funding levels reflected in this package of eight bills wouldn’t meet national needs (in these examples, the comparisons between 2017 and 2018 are not adjusted for inflation unless otherwise noted):

These and other non-defense cuts in the 12 House bills are $5 billion larger than what’s required by the BCA cap on non-defense funding for 2018 — a cap that now reflects the full additional cuts that sequestration requires. In contrast, the House defense levels exceed the BCA defense cap by $72 billion. To pursue a far better course, Congress should come together on a balanced plan that provides equal amounts of sequestration relief for both defense and non-defense programs, as policymakers have done for each previous year since sequestration took effect (see chart). 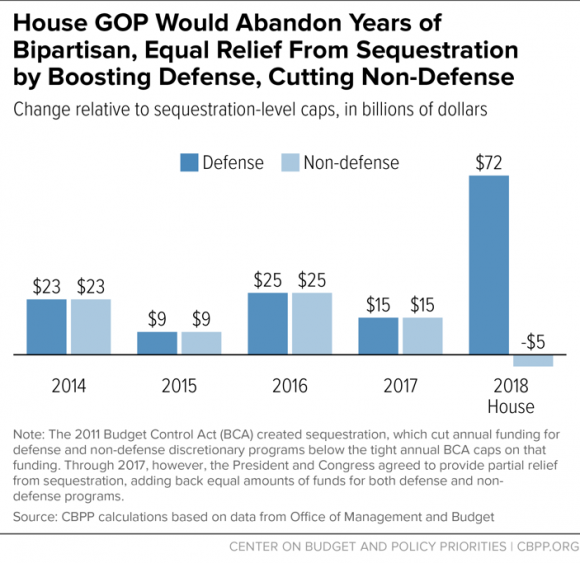 September 5, 2017
PreviousStates Will Begin Exhausting Federal CHIP Funds by December — Unless Trump and Congress Act
NextFederal Spending and Revenue Needs Will Grow
Stay up to date
Receive the latest news and reports from the Center