Low-income families and communities would experience unprecedented cuts in housing assistance under the fiscal year 2014 funding bill for the Department of Housing and Urban Development (HUD) that a House Subcommittee approved yesterday. These cuts come at a time when the need for assistance is rising rapidly, as housing costs continue to outpace the incomes of low-income families (see graph).  The cuts also reflect the fact that the House has adopted an overall cap on annual program spending that is consistent with sequestration and is wholly inadequate.
Image 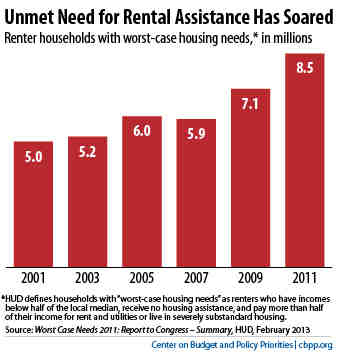 For major capital and block grant programs, the House bill would cut funding to historically low levels that are below even the sequestration-reduced levels of 2013: In other areas, the House bill will lock in for 2014 most of this year’s sequestration cuts.  Because of sequestration in 2013, for example, the Housing Choice Voucher program will assist up to 140,000 fewer low-income families by early 2014.  In addition, thousands of assisted families in cities and towns from New York City to Abilene, Texas, are facing steep rent increases as agencies struggle to cut their programs down to post-sequestration levels.  While the House bill would increase funding to renew housing vouchers by $650 million over the 2013 funding level, four-fifths of the sequestration-related cuts in families served would remain in place in 2014. The cuts in vouchers — like those proposed in public housing — would fall heavily on seniors, people with disabilities, and families with children.
Related Posts:
Topics:
Federal Budget, Housing, Budget Outlook, Funding, Housing Vouchers
PreviousJared Bernstein Talks Sequestration on Yesterday’s “Diane Rehm Show”
NextHow to Shore Up Social Security
Stay up to date
Receive the latest news and reports from the Center