Generational accounting is a method of comparing the effects of budget policies on people born in different years.  But it is hard to interpret and easily misunderstood, and including it in regular budget reports and cost estimates, as the proposed Intergenerational Financial Obligations Reform (INFORM) Act would require, would be a mistake, as we explain in a new paper. Here’s an excerpt: 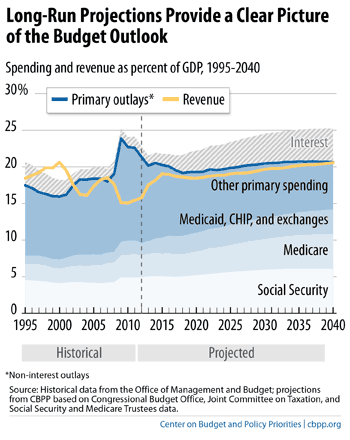 Instead, generational accounting calculates “lifetime net tax rates” for each one-year cohort of the population through at least age 90 and a separate lifetime net tax rate for all future generations combined.  Those measures are supposed to reflect the burden for each generation of taxes minus transfer payments (such as Social Security and Medicare) under existing budget policies.  To calculate those measures, generational accounting projects such key variables as population growth, labor force participation, earnings, health care costs, and interest rates through infinity.

Yet budget experts recognize that projections grow very iffy beyond a few decades, and virtually no one tries to make them beyond 75 years.  In addition, generational accounting relies on highly unrealistic assumptions that skew the results.  For instance, its calculations of lifetime net tax rates assume there would be no changes whatsoever in current law for taxes or transfer policies for anyone alive — extending for the rest of their lives.  Thus, it assumes that, to address the nation’s fiscal challenges, a President and Congress would apply all tax increases and spending cuts only to people not yet born.

Moreover, the lifetime net tax rate of generational accounting is more complex than, and not comparable to, standard measures of tax burdens.  Rather than measure total taxes as a percent of the economy or of household income, it measures net taxes as a percent just of labor income — which is only part of the economy and which makes tax burdens appear greater than they are.  Furthermore, under the concept of net taxes, a reduction in Social Security or other transfer benefits translates into a higher net tax rate, which most people will find confusing.  Also, generational accounting’s authors often express lifetime net tax burdens in raw dollars, which is especially misleading because it fails to relate those net taxes to lifetime income or some other measure of ability to pay.  People could easily but mistakenly compare that lifetime net cost to their own (or the nation’s) current annual income, leading to an exaggerated view of the long-term budget problem.

Adding to these problems, generational accounting rigidly categorizes all government spending as a purchase or a transfer, a distinction that arbitrarily assigns burdens and benefits, often with little regard to their true distribution.  Generational accounting also doesn’t account for the benefits that spending can have for future generations (for example, education and infrastructure spending that raises living standards), and it ignores the fact that the future economy will be larger.  Future generations will have higher living standards and more disposable income even if they bear a reasonable increase in their net tax burden.

Lawmakers should certainly weigh the effects of their decisions over the long run, beyond the standard ten-year horizon of most budget estimates.  But they already have the tools to do that.  Generational accounting adds little to the toolbox, and its results are far too easy to misunderstand and misrepresent. Click here to read the full paper.
Related Posts:
Topics:
Federal Budget, Budget Outlook
PreviousPlenty of Room for Improvement in State Budget Planning
NextHousing Vouchers Are a Proven Anti-Poverty Strategy But Need to Do More
Stay up to date
Receive the latest news and reports from the Center