What You Need to Know About Social Security’s Solvency

Our annual analysis of the Social Security trustees’ report, which we published earlier this week, follows up on our earlier statement and distills what policymakers and citizens most need to know about the 200-plus page report.  The bottom line:  Social Security does not face an immediate crisis, but it does face a funding shortfall two decades from now that the President and Congress should address reasonably soon so the program can fully meet its promises. Social Security benefits — if paid in full — will rise gradually over the next few decades, from about 5 percent of Gross Domestic Product (GDP) today to slightly over 6 percent in the 2030s and beyond.  That roughly mirrors the aging of the U.S. population (see figure).
Image 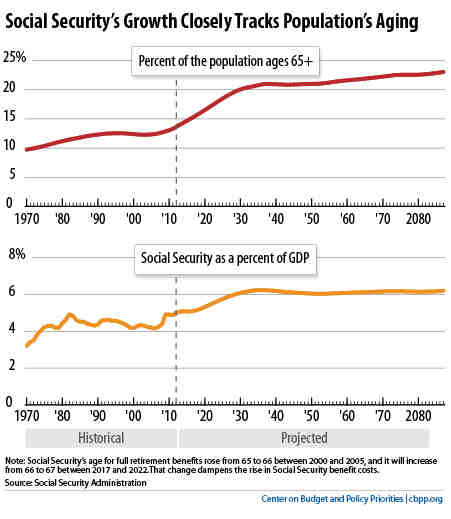 The program’s revenues don’t quite keep up; the trustees state that the program can pay full benefits for the next two decades but faces a shortfall thereafter.  Specifically, the trustees project that the combined Old-Age and Survivors Insurance and Disability Insurance trust funds will be exhausted in 2033 — the same year the trustees projected in last year’s report. Even after 2033 — if policymakers did nothing — the program could still pay three-quarters of scheduled benefits from its incoming tax revenues.  The program isn’t bankrupt, and alarmists who say it won’t be around when today’s young workers retire misrepresent the projections. The program’s 75-year shortfall is 2.72 of taxable payroll or 1 percent of GDP.  Critics who like to cite scary dollar figures — like an “unfunded liability” of $10 trillion over 75 years — almost never give a hint of the economy’s size, which is crucial to the program’s affordability.  Over the next 75 years, for example, GDP will be over $1,000 trillion, and the shortfall is just 1 percent of that. In short, the program faces a funding gap that’s well-documented but manageable.  Lawmakers should address it reasonably soon so the program can fully meet its promises and allow people to plan their work, savings, and retirement with greater certainty. Read our analysis here, and check back tomorrow for what we think policymakers should do to address Social Security solvency.
Related Posts:
Topics:
Disability, Social Security
PreviousFarm Bill Amendment Would Pay States to Cut Off SNAP Benefits for People Who Want to Work But Can’t Find Jobs
NextJared Bernstein Talks Sequestration on Yesterday’s “Diane Rehm Show”
Stay up to date
Receive the latest news and reports from the Center