Slowing of Health Care Spending Is Good News for the Budget

Health spending growth in 2012 remained low for the fourth consecutive year, the Centers for Medicare and Medicaid Services (CMS) reports, continuing a slowdown that has already contributed to a marked improvement in the federal budget outlook.  And, while no one knows how long the slowdown will continue (some analysts attribute it primarily to fundamental changes in the health care system, others to the recession), the Congressional Budget Office (CBO) has concluded that at least part of it is likely to be long-lasting.

“The slowdown in health care cost growth,” CBO Director Douglas Elmendorf wrote in September, “has been sufficiently broad and persistent to persuade us to make significant downward revisions to our projections of federal health care spending.” 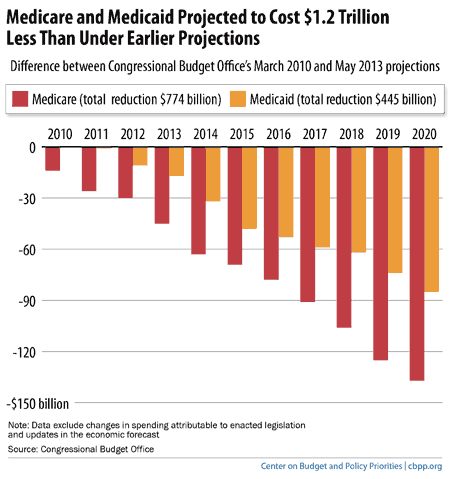 Early reports suggest that the cost slowdown that CMS reported for 2012 continued in 2013.  Medicare spending grew by only 2.3 percent in fiscal year 2013, after adjusting for temporary shifts in the timing of certain payments.  That’s less than the increase in the number of Medicare beneficiaries.

But CBO’s projections show that Medicare and Medicaid are not in crisis.  Responsible reforms, such as those in President Obama’s budget (which would produce $400 billion in health care entitlement savings in the next ten years and $1 trillion in savings in the subsequent decade), can help restore fiscal responsibility without shifting costs to vulnerable beneficiaries or states.  There’s no need for sweeping and misguided changes such as establishing a per capita cap in Medicaid or raising Medicare’s eligibility age.