Medicare has grown financially stronger in both the short and long term compared to last year, its trustees said in their annual report.

The trustees reported that Medicare’s Hospital Insurance (HI) trust fund will remain solvent — that is, able to pay 100 percent of the costs of the hospital insurance coverage that Medicare provides — through 2026.  At that point, the payroll taxes and other revenue for the trust fund will still be able to pay 87 percent of hospital insurance costs, as we explain in our updated analysis (see graph). 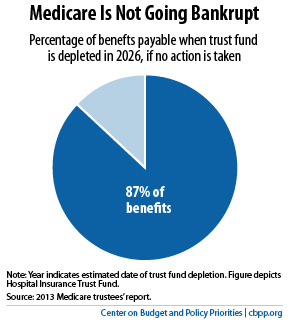 Policymakers will need to close this shortfall with additional revenues, program changes that slow the growth in costs, or most likely both.  But contrary to claims by some policymakers and pundits, Medicare will not go “bankrupt” or cease to operate after 2026 — as that term may suggest.

In fact, Medicare’s financial outlook has significantly improved, thanks to health reform. The trustees project that the HI trust fund will remain solvent nine years longer than before Congress enacted the Affordable Care Act.  The Medicare hospital insurance program faces a shortfall over the next 75 years equal to 1.11 percent of taxable payroll — that is, 1.11 percent of the total amount of earnings that will be subject to the Medicare payroll tax over this period.  This is much less than the 3.88 percent of payroll that the trustees estimated before health reform.

Medicare does face substantial long-term financial challenges, stemming from the aging of the population and the continued rise in costs throughout the U.S. health care system.  It is essential that policymakers take further steps to curb the growth of costs throughout the health care system as we learn more about how to do so effectively.  In the meantime, we can achieve some additional Medicare savings over the next ten years in ways that preserve its guarantee of health coverage and don’t raise the eligibility age or otherwise shift costs to vulnerable beneficiaries.

Click here for our analysis of the trustees’ report, and here to listen to the audio recording of our related media briefing.

Projected Medicare and Medicaid Spending Has Fallen by $900 Billion

August 10, 2012
PreviousIn Case You Missed It...
NextScience — Not Politics — Should Shape the WIC Food Package
Stay up to date
Receive the latest news and reports from the Center