Everything You Need to Know About the Budget Talks, in 11 Charts

| By CBPP
A House-Senate budget conference committee convened last week, and our new chartbook provides the context — what’s happened to deficits since the recession, why the weak economy should be part of the budget talks, what’s at stake for vulnerable Americans, how tax breaks can help reduce deficits, and how policymakers should evaluate deficit-reduction proposals.  Part I below shows that deficits have dropped considerably since the recession began:
Image 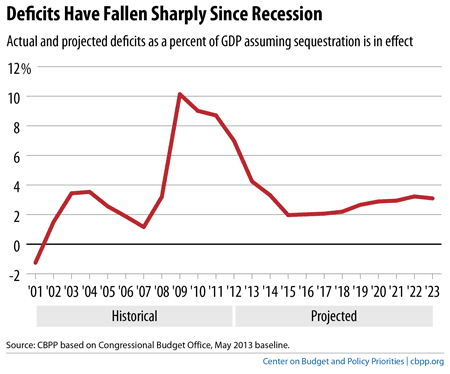 Share
Facebook Twitter Print Email
PreviousMedicaid Enrollment Is Up — as Expected
NextSNAP and Unemployment Insurance Kept Millions Out of Poverty Last Year, Census Supplemental Poverty Measure Shows
Stay up to date
Receive the latest news and reports from the Center