The Myth of the Exploding Federal Government, Part 2

| By CBPP
Part 1 of this post showed that, contrary to claims that the federal government is exploding, total federal spending as a share of the economy has already fallen dramatically from its 2009 peak and federal spending outside of interest payments on the debt is projected to decline in the decade ahead as the economy recovers.  The claim that safety net programs are growing out of control isn’t true, either, as our updated analysis shows.  Here’s the opening:

Low-income programs are not driving the nation’s long-term fiscal problems, contrary to the impression that a narrow look at federal spending during the Great Recession might leave.   In fact, virtually all of the recent growth in spending for low-income programs is due to two factors:  (1) the economic downturn and (2) rising costs throughout the U.S. health care system, which affect costs for private-sector care as much as for Medicaid and other government health care programs.  Lawmakers should bear these facts in mind as they struggle over how to address the nation’s long-term fiscal challenges.

The first cause — increased spending on safety net programs because of the recession — is both appropriate and temporary.  Congressional Budget Office (CBO) projections show that federal spending on low-income programs other than health care has started to decline and will fall substantially as a percent of gross domestic product (GDP) as the economy recovers.  By the end of the decade, it will fall below its average level as a percent of GDP over the prior 40 years, from 1973 to 2012.  (See graph.)  Since these programs are not rising as a percent of GDP, they do not contribute to our long-term fiscal problems. 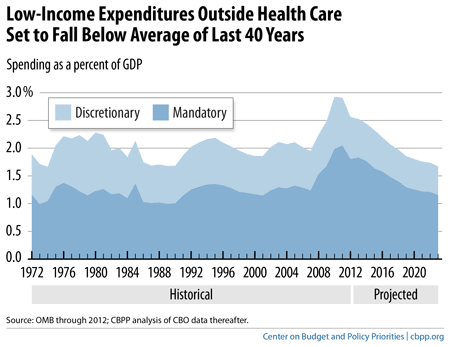 Specifically, federal spending for low-income programs outside health care (including refundable tax credits such as the Earned Income Tax Credit) averaged 2.1 percent of GDP over the past 40 years.  This spending peaked at 2.9 percent of GDP in fiscal year 2010, a substantial increase.  But it has already fallen in 2011 and 2012, and CBO projects that it will return to the prior 40-year average of 2.1 percent by 2017 and then fall further, to 1.7 percent of GDP, by 2023 — a level well below the prior 40-year average.

As our analysis concludes, policymakers and others may hold different views about whether programs for the poor should be maintained at current levels, strengthened, or weakened.  But the mistaken assumption that the universe of safety net programs is experiencing ever-increasing costs is no reason to cut this part of the budget.