Gap Between Federal Rental Assistance and Need Is Growing

The number of very low-income households with serious housing problems rose in 2015 despite an improving economy, a new Department of Housing and Urban Development (HUD) report finds. Over 8 million households had “worst-case housing needs” in 2015, meaning they are renters with incomes below half the local median who don’t have housing assistance and pay more than half of their income for rent or live in severely substandard housing. That’s up from 7.7 million in 2013. The number of households with worst-case housing needs has jumped by 66 percent since 2001. 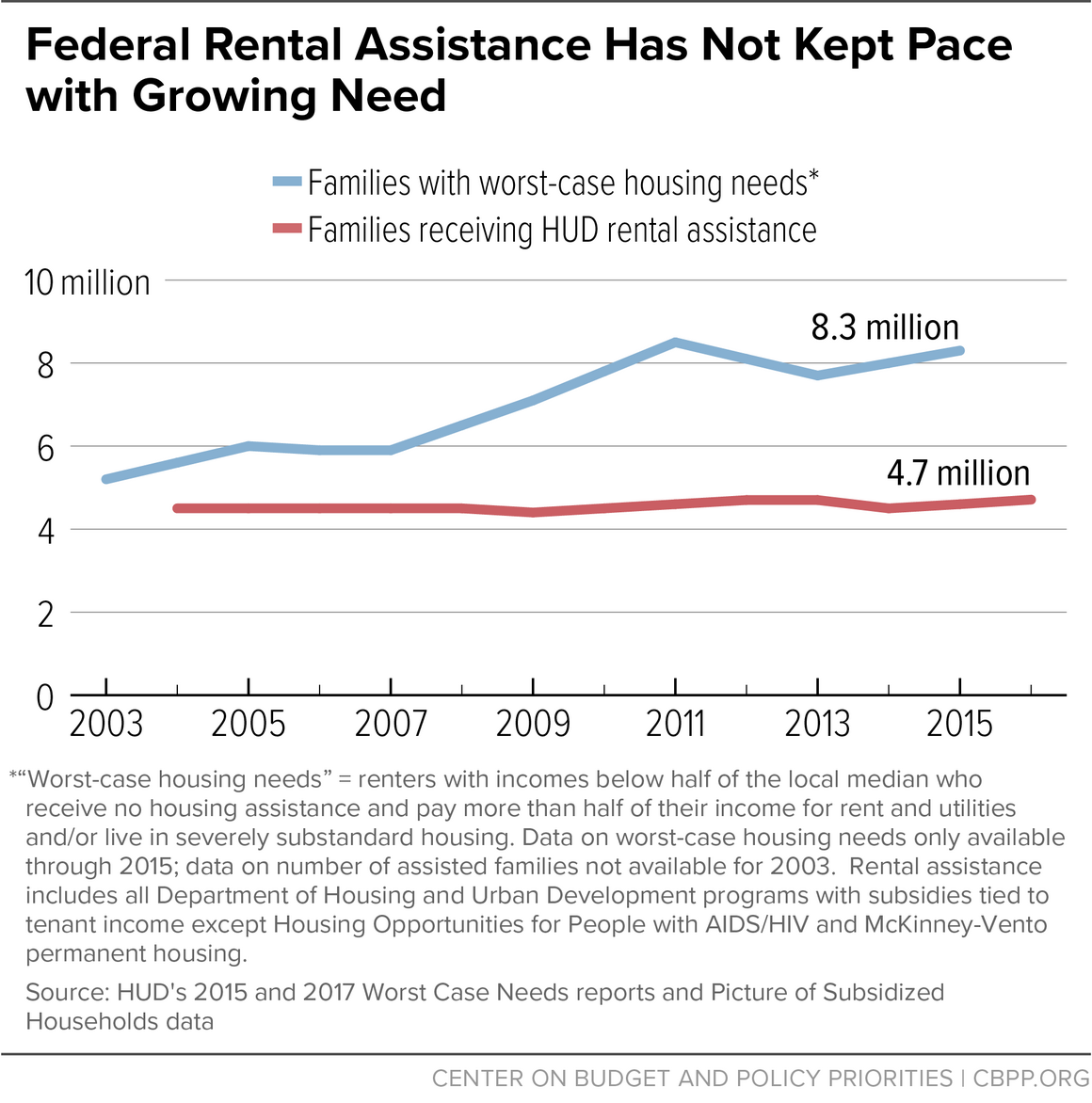 Most of these households are families with children, senior citizens, or include a person with disabilities. Serious housing problems have grown across every demographic, racial, and ethnic group and affect renters living in urban, suburban, and rural areas in all parts of the country. And housing costs continued to grow faster than incomes for extremely low-income renters between 2013 and 2015.

According to HUD, the typical household struggling with serious housing problems is a mother or married couple with two children who works at a low-wage job that doesn’t pay enough to lift them out of poverty. The family pays an average of $1,000 a month for rent and utilities, which consumes half or more of its monthly income. Families that pay such a large share of their income for housing have great difficulty meeting other basic needs and risk losing their homes if they can’t keep up with rent payments. Both eviction and homelessness have far-reaching, harmful consequences for children’s health and development.

Unfortunately, HUD Secretary Ben Carson’s recommendations to improve housing affordability by reducing regulations on housing development and private mortgages likely won’t help these renters. Most newly constructed rental units aren’t affordable for these renters without federal subsidies. For example, the supply of rental housing grew by 10 percent between 2013 and 2015, but the number of units affordable to very low-income renters fell by 7 percent, according to HUD’s latest analysis. Strategies to increase the supply and reduce the demand for rental housing (by increasing homeownership rates) could take some pressure off escalating rental costs, but won’t be enough to make rental housing affordable to families with incomes below half the median.

August 8, 2017
PreviousCBO: Severe Harm If Trump Halts Health Cost-Sharing Payments
NextFighting Hunger at the Store: Retailers’ Important Role in SNAP
Stay up to date
Receive the latest news and reports from the Center