Take one example he mentions, the mortgage interest deduction.  It provides a tax subsidy for people who own a home, just as housing vouchers provide a subsidy for many low-income people who rent.  Both are federal housing subsidies; the fact that one is delivered through the tax code and the other through a spending program is immaterial.  As Feldstein underscores, “Republicans who would oppose direct outlays on programs [like the voucher program] should favor limiting the subsidies through the tax code.”

Feldstein also points out that “[s]ubstantial revenue could be raised by limiting the government spending built into the tax code.”  As a group, in fact, the tax exemptions, deductions, and other tax breaks collectively known as tax expenditures are larger than each of the major spending programs (see graph), and they’re often less well targeted than comparable program expenditures.  Cuts to tax expenditures should be an important part of a package to replace sequestration. 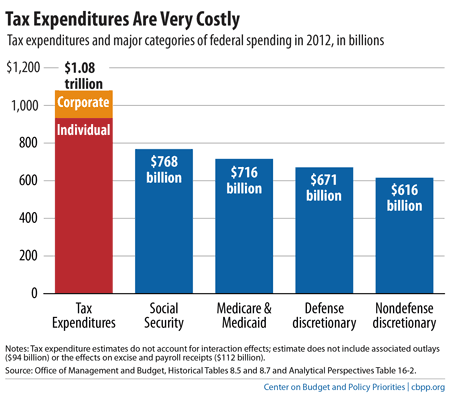 Everything You Need to Know About the Budget Talks, in 11 Charts

May 30, 2013
PreviousFor Some States, Education Cuts and Tax Cuts Go Hand in Hand
NextFaster Medicaid Enrollment Neither a Surprise Nor a Concern
Stay up to date
Receive the latest news and reports from the Center