2) Often inefficient. Tax expenditures can distort the allocation of resources.  CBO notes, for example, that the mortgage interest deduction can convince people to “purchase more expensive homes, investing too much in housing and too little elsewhere relative to what they would do if all investments were treated equally.”  In addition, tax expenditures sometimes pay people to do something they would have done anyway.  For example, tax incentives for retirement saving may lead some people to simply “reallocate existing savings from accounts that are not tax-preferred to retirement accounts, rather than add to their savings.” 3) Tilted to high-income people. The value of many tax expenditures is tied to a taxpayer’s tax rate, so it rises as his or her income rises.  These tax expenditures thus are “upside down” — they deliver the biggest subsidies to the people who least need a subsidy to do whatever the tax break is designed to encourage (see second graph).
Image 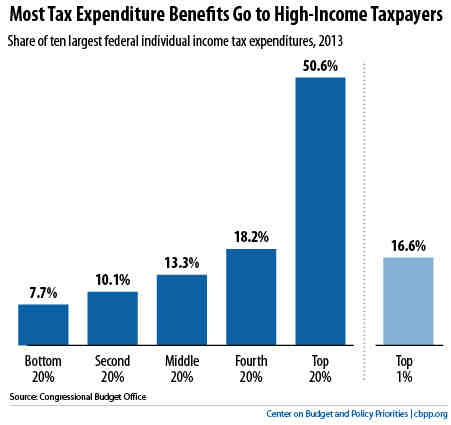