Fed Right to Be Focusing on Jobs

Bernanke clearly explained what's still wrong with the economy, outlined the Fed's thinking on monetary policy and strongly implied that fiscal policy is still off base. His account and policy recommendations reflect mainstream economic thinking – and, thus, run counter to much of the economic doctrine that's driving Republican budget policies.

Bernanke argued that the Fed’s extraordinary measures to stimulate the economy are consistent with its dual mandate to pursue maximum employment and price stability.  As the chart below shows, unemployment remains well above the Congressional Budget Office’s estimate of what it would be if the economy were operating at maximum capacity (the “high employment unemployment rate” in the chart) while inflation is well below the Fed’s target.  However, many Republicans, including Rep. Kevin Brady, chairman of the Joint Economic Committee, want to remove the objective of maximum employment from the Fed’s mandate and effectively eliminate its ability to respond to extraordinary events like the Great Recession.
Image 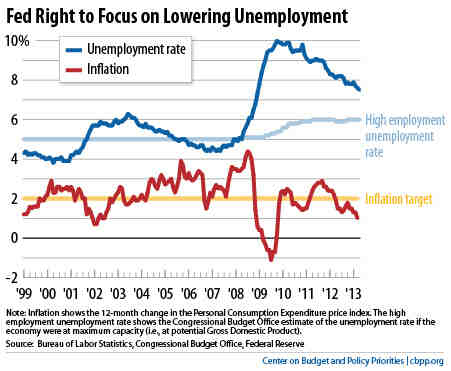 Bernanke testified that fiscal policy (changes to taxes and spending) was quite expansionary at the federal level during the recession and early in the recovery, as spending increases and tax cuts helped to stimulate the economy.  However, spending cuts and tax increases at the state and local level (where balanced budget requirements generally rule) and subsequent tightening at the federal level (spending cuts and tax increases) substantially offset that expansionary effect. Once again, Bernanke implicitly asked for help from lawmakers to boost employment in the short term without compromising longer-term fiscal stabilization by “replacing some of the near-term fiscal restraint now in law with policies that reduce the federal deficit more gradually in the near term but more substantially in the longer run.” Republicans argue that the 2009 Recovery Act was ineffective, that a balanced budget amendment to the Constitution is a good idea, and that large, immediate spending cuts won’t harm the economy.  Not surprisingly, as I conclude the US News blog post, “the House Republican budget goes full bore on deficit reduction, starting immediately – jobs be damned.” That’s not where we need to go. You can read the entire US News post here.
Related Posts:
Topics:
Federal Budget, Economy
PreviousWhy Smart States Are Raising Revenues, in One Graph
NextCBO Highlights Three Good Reasons to Reform Tax Expenditures
Stay up to date
Receive the latest news and reports from the Center