Yes, the Ryan Budget Is Contractionary

| By Chad Stone
If enacted, House Budget Committee Chairman Paul Ryan’s budget would slow the economic recovery.  Chairman Ryan selectively uses Congressional Budget Office (CBO) analysis to argue that his budget offers long-term economic benefits, while dismissing CBO’s finding — in the very same report — that austerity measures like those that he proposes would take a costly toll on the economy over the next few years and could put the recovery at risk. The CBO analysis that Ryan uses to justify his budget’s long-term economic benefits looks at the effect on economic activity and the income of U.S. residents of an illustrative deficit-reduction plan with $4 trillion of policy savings phased in over the 2014-2023 period.  CBO finds that such a policy would lower U.S. national income in 2014-2016, because the dominant effect of deficit reduction in this period would be to suppress demand for goods and services.
Image 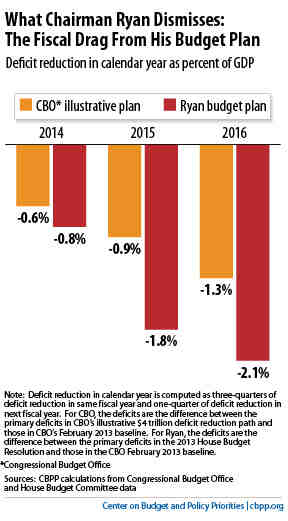 CBO estimates that the deficit reduction in its generic plan would reduce economic activity on a dollar for dollar basis in 2014, lowering gross domestic product (GDP) by 0.6 percentage points.  The agency does not provide an estimate of associated job losses, but separately CBO estimates that the 0.6 percentage point decline in GDP in 2013 that it attributes to the sequestration budget cuts would cost 750,000 jobs. Nor does CBO provide year-by-year economic effects but, as the chart shows, the “fiscal drag” from deficit reduction gets larger in successive years.  With its much larger budget cuts, the Ryan plan would present even larger obstacles to the recovery. In CBO’s illustrative example, the economy eventually overcomes the drag on growth from greater deficit reduction (although not without experiencing lower incomes and greater unemployment and hardship in the meantime).  The longer-term effects of deficit reduction on saving and investment eventually produce higher levels of GDP and national income than those in CBO’s baseline economic projections. Both the short-term costs of deficit reduction and the longer-term benefits demonstrated in CBO’s analysis reflect mainstream economic thinking.  Ryan, while happy to embrace the longer-term implications of CBO’s analysis, rejects the short-term implications.  Instead, he appeals to a “contrasting view” held by “some economists” suggesting that fiscal austerity would be expansionary even in the short-term — an idea that has become increasingly discredited both in academic circles and by the practical experience of Great Britain and the eurozone countries that have tried it. CBO’s analysis illustrates the trade-offs that policymakers face in formulating a deficit reduction plan.  Ryan’s appeal to “expansionary austerity” waves a magic wand at those trade-offs.  The sound approach is the one that many mainstream economists, including former Office of Management and Budget Director Peter Orszag and Federal Reserve Chairman Ben Bernanke have recommended:  enact now a combination of policies including both measures that increase the deficit modestly in the short term to strengthen the economic recovery and measures that achieve substantial deficit reduction and are phased in over time.
Related Posts:
Topics:
Federal Budget, Budget Outlook, Economy