The American Taxpayer Relief Act (the “fiscal cliff” deal of early January) dialed back the fiscal restraint that was scheduled to take effect — enough, in fact, that the Congressional Budget Office (CBO) baseline economic forecast no longer shows the economy contracting in 2013.  Nevertheless, CBO continues to project a sharp slowdown in economic growth this year due to the fiscal tightening that remains in place, and it is still dangerous to pursue too much deficit reduction, too fast.

CBO estimates that the economy will grow just 1.4 percent this year and the unemployment rate will remain near 8 percent through the year.  That means another year of enormous economic waste and high unemployment.  CBO estimates that gross domestic product in 2013 will fall short of the economy’s full potential by $1 trillion (see chart).  It projects that the gap won’t close and we won’t see a high level of employment until 2017.  That will require sustained economic growth at a faster pace than we have seen thus far in the recovery — and much faster than we will likely see this year under current law. 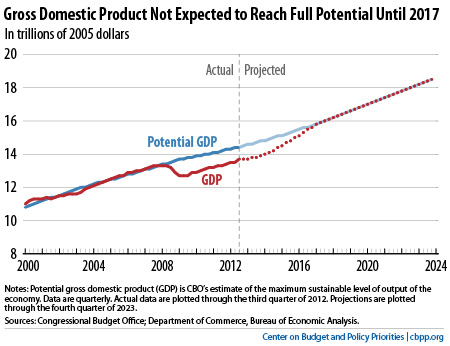 CBO estimates that the fiscal restraint still in effect after the fiscal cliff deal will subtract 1½ percentage points from economic growth this year.  Three things account for the bulk of that restraint:  the automatic cuts in federal spending (“sequestration”) due to kick in March 1, the expiration of the 2009 payroll tax cut, and expiration of some of President Bush’s tax cuts for wealthy taxpayers.

Although sequestration does the least of these three policies to cut the budget deficit this year, dollar-for-dollar it restrains growth and job creation the most.  In fact, CBO estimates that it accounts for roughly the same overall drag on growth as the combined tax changes.  Moreover, most of the drag from the tax changes arises from the 2 percentage point increase in the payroll tax; dollar-for-dollar, higher tax rates on the very affluent do little to hamper the economic recovery.

Policymakers missed an opportunity in the “fiscal cliff” negotiations to resolve the sequestration issue by replacing the across-the-board cuts with policies that achieved equivalent budget savings but that were more balanced between taxes and spending and that did not take effect until the economy was stronger.  They missed an opportunity to boost the recovery and brighten jobless workers’ job prospects when they failed to extend the payroll tax cut.  And they missed an opportunity to achieve more deficit reduction that didn’t threaten the recovery when they did not end Bush-era tax cuts for more very well-to-do Americans.

Our recent analysis shows that $1.5 trillion in additional deficit reduction would stabilize the debt over the next ten years.  Moreover, it shows that deficit reduction should be designed carefully to avoid further slowing the recovery, and it should be phased in over coming years.  Preferably, policymakers would couple those permanent deficit-reduction measures with some targeted temporary fiscal measures to accelerate growth and job creation now.

They should start by replacing sequestration with a balanced package of tax and spending measures that do not exert such a sharp, immediate drag on the recovery.

Good News: The Payroll Tax Cut Is Now Part of the Tax Debate

November 30, 2012
PreviousThe Misguided Medicare “Trigger”
NextSNAP Responded as Designed to Economic Hardship
Stay up to date
Receive the latest news and reports from the Center