Tax Day is a timely reminder that wage and salary earners, and small and domestic businesses, pay taxes on their income and profits each year to pay for the nation’s priorities, ranging from safer highways to health care for the elderly, a soldier’s gear, and diabetes research.  Yet many multinational corporations effectively get to choose each year whether and how much U.S. tax to pay on their foreign profits — and many choose to avoid those taxes indefinitely.

All countries face a basic question of how to tax profits that domestically based companies earn in other countries.  A worldwide tax system taxes them the same as domestically generated profits, whereas a territorial system imposes no taxes on foreign profits.  The United States has a hybrid system that taxes foreign and domestic profits at the same rate but only taxes foreign profits when they’re brought back to the United States, allowing companies to defer U.S. tax indefinitely. 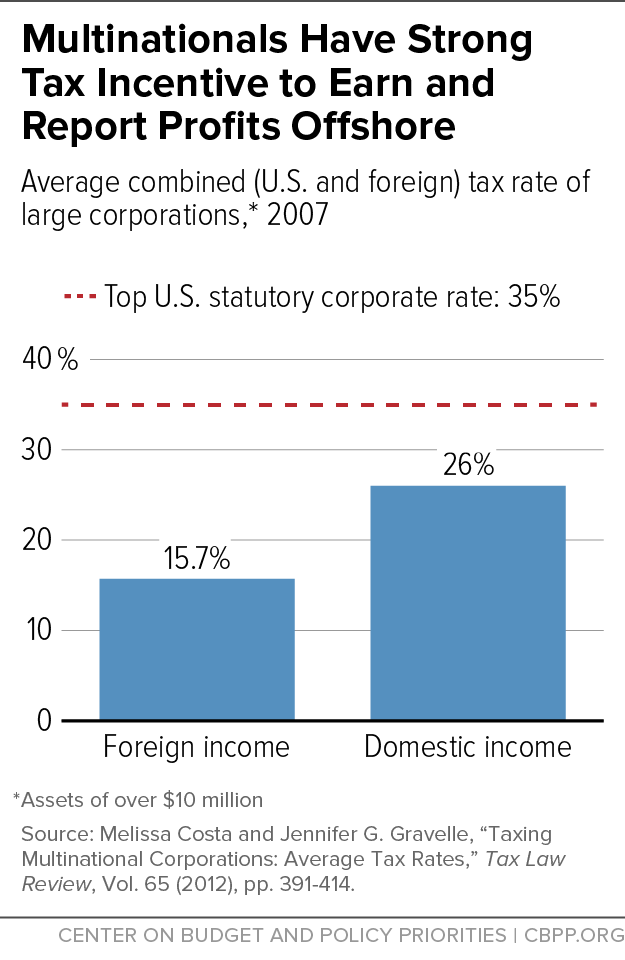 This deferral feature is one of the costliest corporate tax expenditures, as we noted the other day.  And it gives multinational corporations a powerful incentive to artificially shift U.S.-earned profits overseas.

Shifting a large amount of U.S.-earned profits to foreign tax havens is one way that multinationals achieve a much lower overall tax rate for their foreign income than their domestic income, as the chart shows.  (Various other tax breaks enable multinationals to pay a lower share of their domestic profits in tax than the top statutory corporate tax rate of 35 percent.)  Reducing the tax code’s foreign tilt should be a core element of any future corporate tax reform.

The Fiscal and Economic Risks of Territorial Taxation