Federal budget caps on non-defense discretionary programs, the category that includes most housing assistance for low-income families, have worsened the neglect of low-income housing programs that began in the mid-1990s — and that contrasts sharply with the expansion and innovation over the several prior decades, as we illustrate in our new chart book.

In the wake of urban riots in the late 1960s, policymakers began a sustained bipartisan effort to expand affordable rental housing for low-income families.  From 1965 to 1995, federal rental assistance for low-income families grew from less than 600,000 to more than 4.5 million units.  The Housing Choice (“Section 8”) Voucher and Section 8 Project-Based Rental Assistance programs, which lawmakers created in 1974 and expanded to serve nearly 3 million families by the mid-1990s, largely drove this growth.

Federal housing policy took a sharp turn, however, in 1996.  While federal spending on housing assistance grew robustly before then, relative to gross domestic product (GDP), it has fallen by 30 percent since. 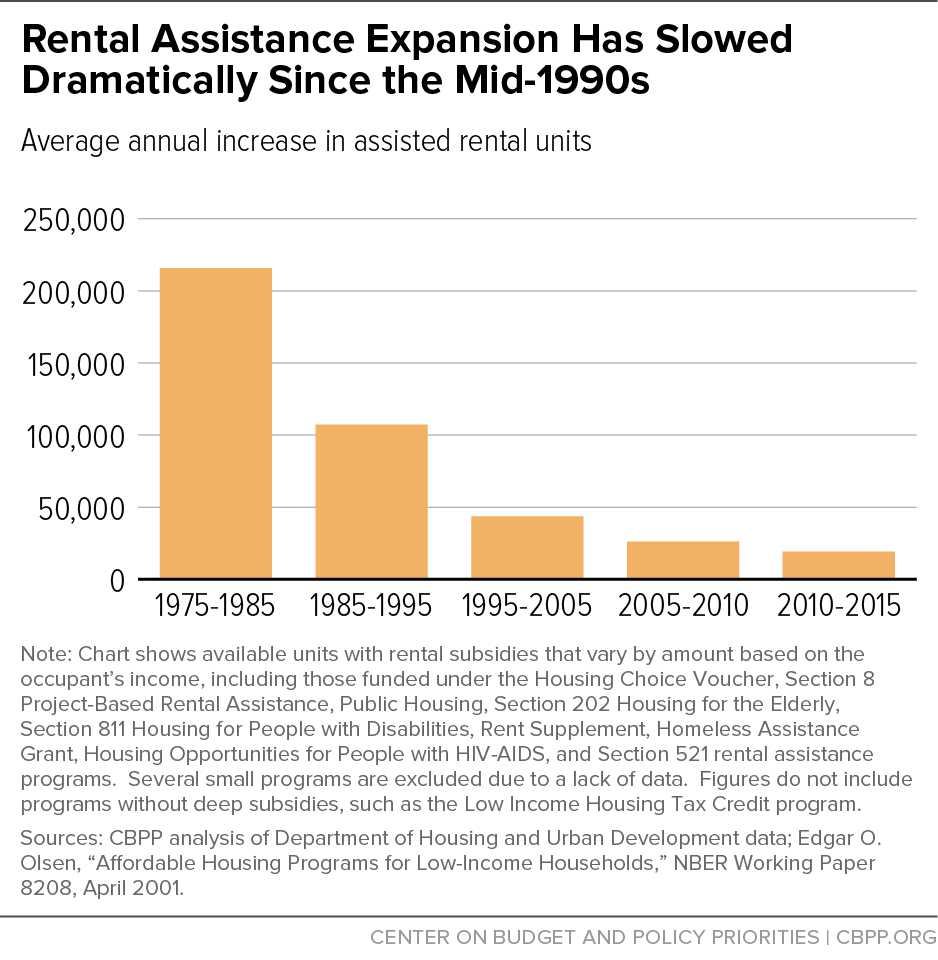 Policymakers have established several important initiatives to boost rental assistance since the mid-1990s, including funding nearly 60,000 new units of supportive housing for chronically homeless individuals since 2001, and more than 100,000 new housing vouchers for special groups, mostly homeless veterans, since 2008.  These efforts have helped reduce veterans’ and chronic homelessness by significant margins.  Nevertheless, these expansions have been modest compared to earlier efforts, and they’ve been offset in part by other cuts, such as the loss of 45,000 housing vouchers due to sequestration.

Moreover, while policymakers have neglected rental assistance programs, a growing gap between renters’ incomes and the cost of housing has worsened low-income families’ struggles to find affordable rentals.  I’ll be back tomorrow with more on that.