Congress Should Act to Reduce Child Homelessness in 2017

As Congress begins work this week on the Department of Housing and Urban Development’s 2017 budget, it should place a high priority on meeting the President’s request for $88 million to fund 10,000 new housing vouchers for homeless families.  A strong body of evidence shows that vouchers reduce homelessness and can help children in poor families grow up in better neighborhoods that boost their chances of long-term success.

Of the 1.5 million people who spent at least part of 2014 in a homeless shelter, nearly 315,000 were children.  Indeed, children under age 5 are at greater risk of homelessness than people at any other age.

Moreover, shelter use is only the tip of the iceberg; housing insecurity is much more prevalent among poor families with children than the homelessness data alone indicate.  The families of more than 1 million school-aged children are living doubled up with other families, in hotels or motels, or on the street, Education Department data show.  A study of women with children who were transitioning from welfare to work found that 45 percent had experienced housing insecurity during the prior year.

Matthew Desmond’s new book, Evicted, chronicles the harsh impact of housing instability on children and their families.  Research consistently links homelessness and housing insecurity to a range of adverse outcomes for children that have long-term consequences, including increased risk of cognitive, mental health, and behavioral problems, physical health problems such as asthma, and poor school performance.  (Low-income children who switch schools frequently are less likely to complete high school, for example.)

Yet research also shows that we know how to reduce child homelessness and housing insecurity.  The rigorous Family Options Study, for instance, found that housing vouchers helped the vast majority of homeless families with children that received them to secure stable housing.  Homeless families receiving vouchers also were much less likely than other homeless families to experience domestic violence or have their children placed into foster care (see graph). 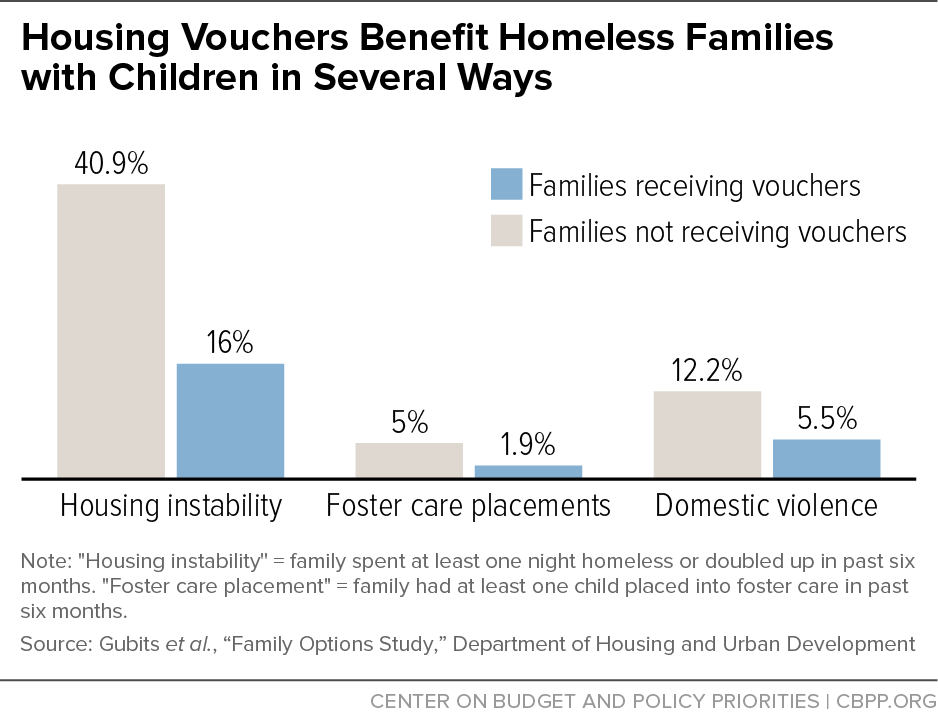 Despite their effectiveness, the number of vouchers available to families and others has fallen in recent years due to budget cuts.  By meeting the President’s request to fund housing vouchers for 10,000 homeless families, lawmakers could reverse this trend and invest in these children’s futures.